The Chicago Tribune had an excellent set of charts this weekend in A Tsunami of Red Ink regarding US government debt and who owns it, and also a comparison of US debt to the national debt of other countries. 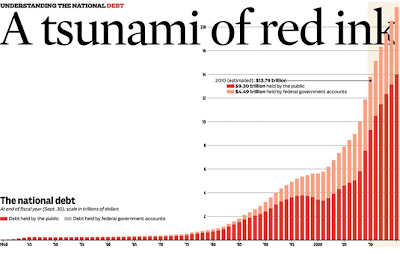 Debt as a Percentage of GDP

Comparison of US Debt to Other Countries

Click on the link at the top to see foreign holders of US debt country by country. The top three US debt holders are China, Japan, and the UK.

Some will not believe those figures on debt to GDP comparisons. I don’t either. For starters the numbers are from 2009.

The footnote also says, if intragovernmental debt is included the figure is 83%. That number is approximately correct in my opinion (as of 2009).

Some will want to count unfunded Social Security and Medicare liabilities out to 2050 or whatever. This is simply wrong. That would be like counting a car you intend to buy 3 years from now as part of your debt now.

Many things can happen between now and then.

Likewise, the plans for Social Security and Medicare might change. Costs may go up, or down. The plans may be scaled back by the next generation of US citizens who think our generation was the most greedy in history.

The first part of the article is informing and interesting, the second part is rather questionable. In particular this statement makes very little sense:

Some will want to count unfunded Social Security and Medicare liabilities out to 2050 or whatever. This is simply wrong. That would be like counting a car you intend to buy 3 years from now as part of your debt now.

Not so much! A car I intend to buy 3 years from now is not a commitment made by anybody towards me or from me towards anybody. It does not have any contractual character. It contains no financial obligations whatsoever.

As I explained before:

Then there are unfunded social security and medicare obligations of about $43 trillion according to the Treasury’s own Financial Report for 2008:

The SOSI provides additional perspective on the Government’s long term estimated exposures and costs. However, it should be noted that the Government’s financial statements do not reflect future costs implied by any current policy, such as national defense, the global war on terrorism, and disaster relief and recovery. Table 3 shows the Government’s estimated present value of future social insurance expenditures, net of dedicated future revenues for the programs reported in the Statement of Social Insurance (SOSI), projected to be $43 trillion as of January 1, 2008 for the ‘Open Group’6. While these expenditures are currently not considered Government liabilities, they do have the potential to become liabilities in the future, based on the continuation of the social insurance programs’ provisions contained in current law.

A liability, or debt, is simply “the obligation of one person or group to provide future goods to another person or group.” Thus, for the discerning economist, it is rather irrelevant if the government “considers” or “officially calls” them liabilities. As far as their impact on human action is concerned, and thus all that economics cares about, they are debts. This brings the total US debt up to around $93 trillion (with total public debt at around $54 trillion).

It may be accurate to say that a partial default on unfunded Medicare and Social Security liabilities will be a lot less eye catching and PR laden than one on the official public debt floating around. But that doesn’t mean that it won’t have major effects on people’s behavior in society. It also doesn’t change its fundamental praxeological character. One need only look at the current madness unraveling in the field of public sector unions and public pensions to appreciate this fact. (This is one more reason why I am surprised that someone like Mish brushes over the phenomenon of unfunded federal government obligations so cavalierly and suggest that they not be considered public debt.)

In fact, I believe that the first wave of public debt defaults will occur silently in the realm of those unfunded, off-balance-sheet liabilities, just as it has recently been happening in Greece.

2 thoughts on “Are Unfunded Liabilities Part of the Public Debt?”