…or else their theory may appear inconsistent and impossible to validate. Don’t get me wrong, the Austrian Business Cycle Theory (ABCT) is great and applies sound economics every step of the way. But its application suffers from a deficiency: It is only part of a larger theory. I will explain what I mean by that and the inconsistencies it leads to.

They never consider the idea of a consumption business cycle, at least I was unable to find it anywhere. But I can’t find a reason to dismiss the notion of such a cycle.

In case you are wondering what the ratio would look like if we assumed that the entire trade deficit was due to consumer goods: 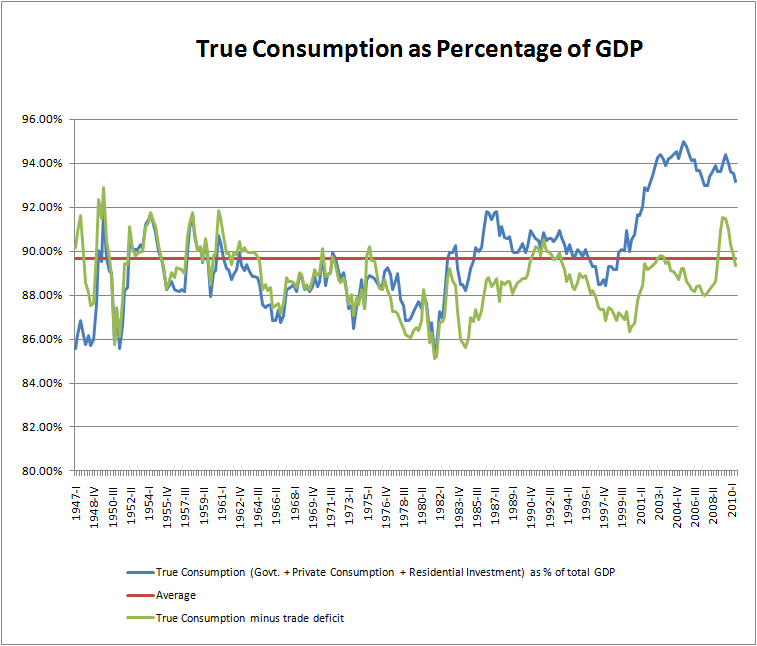 In fact, a much more realistic assumption is that the ratio of consumer vs capital goods is the same for imported/exported goods as it is for all of production, in which case the real ratio would be closer to the blue line or at least somewhere in between blue and green.

The solution to this is simple. What Austrians currently refer to when they say business cycle has to be viewed as the production business cycle. Together with the consumption business cycle it forms a general theory of the business cycles which simply establishes that resources are misdirected as a result of government intervention. From where to where, however, highly depends on the types of loans made and/or subsidized.

This is what I established and outlined in detail in The Business Cycle Revisited, and I am open to feedback and constructive criticism from the Austrian community. :)