“With PCR you can find almost anything in anybody (…) There’s very few molecules that you don’t have at least one single one of them in your body. So that could be thought of as a misuse of it, to claim that it’s meaningful (…) It doesn’t tell you that you’re sick.” – Kary Mullis, Nobel Prize winning Inventor of the PCR method that’s currently misused in the so called “Covid” tests to manufacture the Covid panic that so many amateurs around you are falling for right now.

Nima discusses the latest of many dire climate change reports.

“solar variability has been the dominant influence on Northern Hemisphere temperature trends since at least 1881.” (http://www.sciencedirect.com/science/article/pii/S0012825215300349)

“If the climate continues its cooling and the sun behaves in a manner not witnessed since 1800, we can be sure that climate changes are dominated by the sun and that atmospheric CO2 has a very small role in climate changes. If the same climatic patterns, cyclic warming and cooling, that occurred over the past 500 years continue, we can expect several decades of moderate to severe global cooling.” (http://scienceandpublicpolicy.org/images/stories/papers/reprint/multidecadal_tendencies.pdf)

“the ice winter severity index in the Baltic Sea is modulated by solar activity and solar motion in several frequency bands during the last 500 years.” (http://www.sciencedirect.com/science/article/pii/S1364682612002167)

“These quantities were analyzed in two GCMs and compensating errors in the SW and LW clear-sky, cross-atmosphere radiative flux divergence were found to conspire to produce somewhat reasonable predictions of the net clear-sky divergence. Both GCMs underestimated the surface LW and SW CRF and predicted near-zero SW CRE when the measured values were substantially larger (~70 W m−2 maximum).” (http://journals.ametsoc.org/doi/abs/10.1175/JCLI-D-11-00072.1?af=R)

“These findings, together with the missing orbital signature in published dendrochronological records, suggest that large-scale near-surface air-temperature reconstructions relying on tree-ring data may underestimate pre-instrumental temperatures including warmth during Medieval and Roman times.” (http://www.nature.com/nclimate/journal/v2/n12/full/nclimate1589.html)

“the global temperature increase during the last century is between 0.4°C and 0.7°C, where these two values are the estimates derived from raw and adjusted data, respectively.” (http://www.itia.ntua.gr/en/docinfo/1212/) 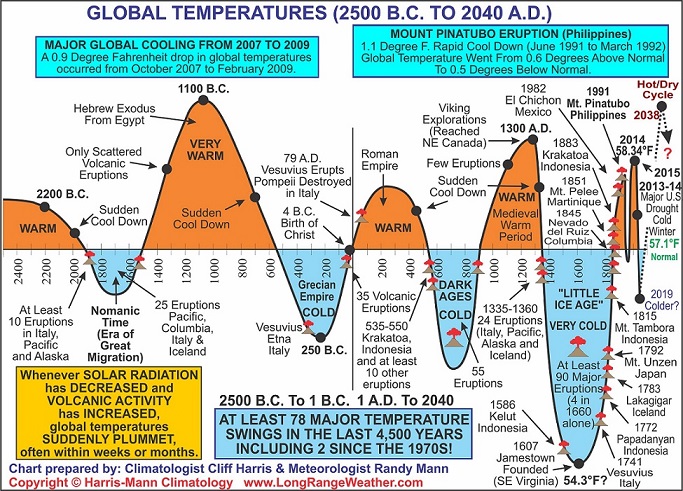