For what it’s worth, here is an actually semi-intelligent statement from Franklin Roosevelt :

All Government employees should realize that the process of collective bargaining, as usually understood, cannot be transplanted into the public service. It has its distinct and insurmountable limitations when applied to public personnel management.

The very nature and purposes of Government make it impossible for administrative officials to represent fully or to bind the employer in mutual discussions with Government employee organizations.

Particularly, I want to emphasize my conviction that militant tactics have no place in the functions of any organization of Government employees.

A strike of public employees manifests nothing less than an intent on their part to prevent or obstruct the operations of Government until their demands are satisfied. Such action, looking toward the paralysis of Government by those who have sworn to support it, is unthinkable and intolerable.

Right up there with wars, patriotism, religion, racism, etc. you can find public sector unionism.

I found this unsurprising anecdote from a recent event very instructive, it’s from Mish’s blog:

President Obama is the Slave Master

Please consider the following quote heard recently at a tea party in Denver.

… They are trying to distract you to make you think that what they are all about is the right thing. In reality you’re just a pawn to them, a pawn that the Democratic Party and Barack Obama are using to keep them in power. This is a form of slavery. Liberals are enslaving themselves. Barack Obama is their slave master and they are doing his bidding for him. They don’t see it that way but that’s how it is.Was it a white racist who said that?

No it wasn’t. It is the man waving the Gadsden flag in the following image. 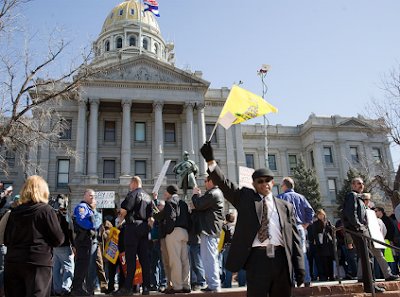 That is Leland Robinson, 51, a Denver native. He was hounded and harassed in Denver by an aggressive woman in a purple SEIU shirt who told him …

Another woman in red made further racial comments “I asked you a question: Do you have any children? That you claim, that you claim.” 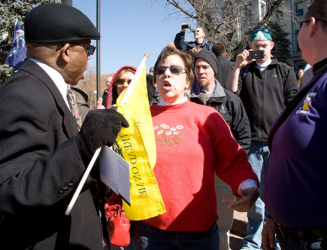 A bystander asked “What did you mean when you said does he have any children that he claims?”

To which the lady in red replied: “Because he’s such a free spirit and an entrepreneur, I would assume that he’s not supporting children.”

Those damn lazy, good for nothing entrepreneurs, all they do is get paid for by voluntary customers for voluntary services! How is that helping anybody?!

I think it might be instructive for public union boot licking liberals out there to look at so that they can understand how closely tied union thug mentality and other forms of bigotry are and will always be. Oh, and I know, this was of course an isolated incident and there will always be bad apples who … bla bla bla. Sure, suuuuuure =)

Public sector unions today are kicking and screaming. The day of reckoning has finally arrived and changes are bound to come that will put these thugs in their place, at least for a little while.

Their record in terms of service done to society is dismal to say the least.

By the way, I also wrote this about public pensions imploding over a year ago.

I’m sure it was fun, that is in a pathetic, parasitic, and superficial way. But the ride is over. Time to clean the slate and move on people …