As explained before, inflation and deflation within a certain territory are defined as increase and decrease of the total volume of money plus credit in that territory.

Probably the best approximation on the development of total credit outstanding in the US is the Federal Reserve’s so called Flow of Funds report’s data series “Total Credit Market Debt Owed“.

The long term series shows us the historical relevance of 2008’s credit event: 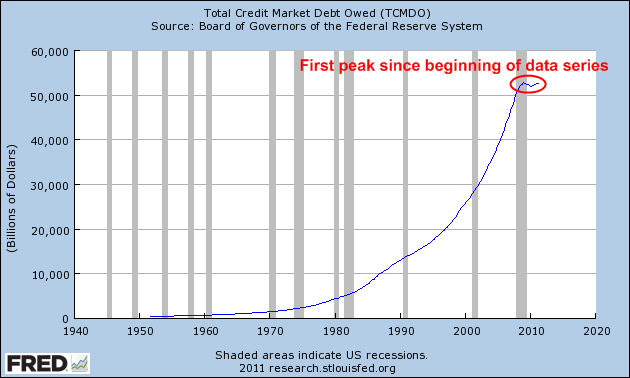 As I predicted before, I believe that the US has reached peak credit in 2009 and is now on a long term path of credit contraction. I would consider the 2010 bump an anomaly, one that was brought about and fueled by massive and unprecedented government stimulus and bailout programs, and a general yet tentative mood of things potentially looking up again.

As I also predicted, it will be those stimulus and bailout programs that will be aggravating the agony and sluggishness, and prolonging the duration of this necessary correction:

Zooming in, we can see that as of Q2 2011 (the latest quarter available in the data series) it looks like all these countermeasures have run out of steam and total credit has begun contracting again, from around $52,650 billion to around $52,550 billion, a contraction of roughly $100 billion: 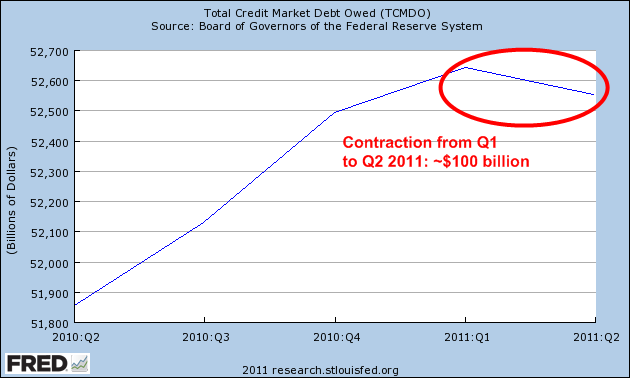 I have recently come to realize, mostly based upon this article that the Treasury’s Supplementary Financing Program really seems to be nothing but another sort of checking account that the federal government holds at the Fed, in particular it is actual spendable money, not just a reserve balance that would still need to be loaned out in order to become spendable money. And as you can see, the Treasury does spend the money, since it obviously regularly draws upon that account, to the point where now the balance on there is zero again. Thus I will from now on include it when adding up the different components to come up with theTrue Money Supply.

Based on that we can see that the true money supply is currently at $2,592 billion, and that so far its been able to maintain its growth through 2010 and 2011 for the most part: 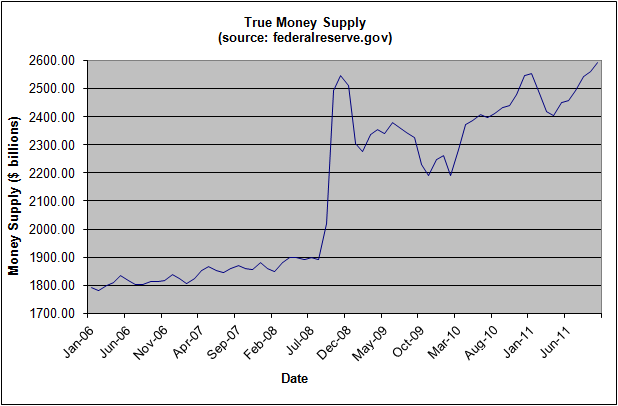 The growth rate is currently at around 6.19% and has been recovering from a low 1.28% around April: 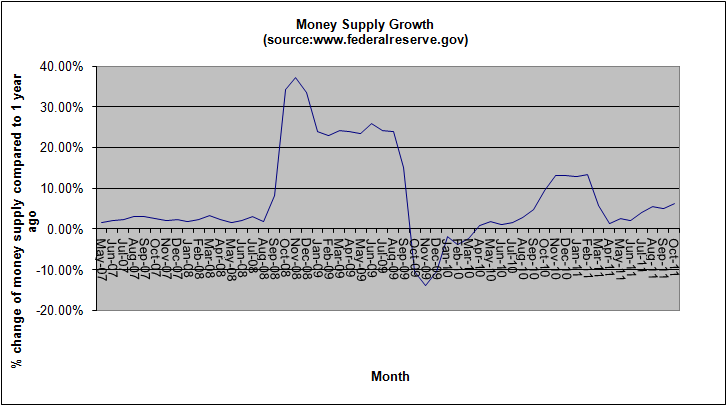 During the period from Q1 to Q2 2011, which is the one we observed credit growth for above it has risen from $2,417 to $2,458, so by about $41 billion, which is less than the volume of credit contraction. And since then through now the money supply has roughly risen by another $140 billion (we’ll have to wait for the Q3 Flow of Funds report to see by how much this may or may not have been counteracted via credit contraction).

Overall it seems as though it is still a pretty close call between inflation and deflation, with inflation having certainly been the dominating force during 2010 and maybe also 2011, but slowly coming to a halt as credit expansion seems to have come to an end at this point.

We’ll have to wait and see what the next few months bring.

M1 in in China has most recently begun to fall: 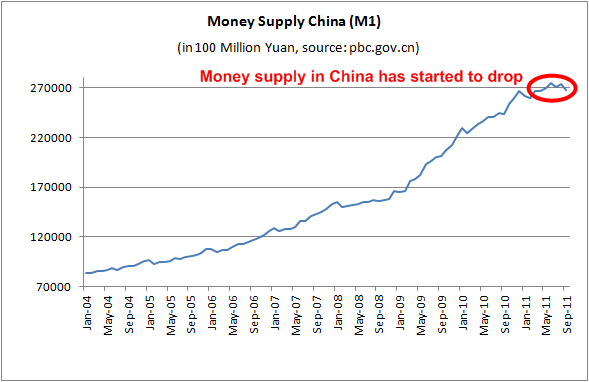 The growth rate has now slowed to around 10%, coming closer to that in the US: 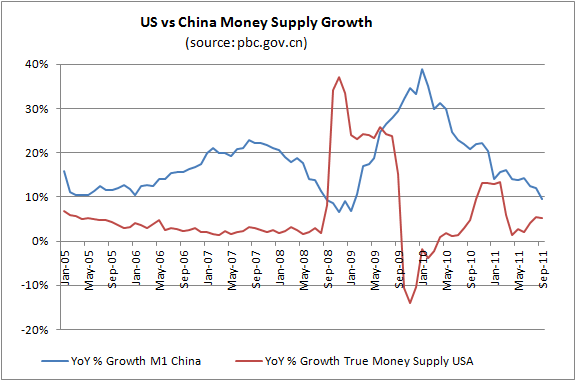 Money supply in China is slowing most likely as a result of contracting credit as a correction from prior government stimulus malinvestments.

As I said before, the Chinese housing bust is underway, the Chinese economy is headed for a severe recession, and that’s what the slowdown in the money supply growth rate may very well be indicating at this point.

2 thoughts on “Credit & Money Supply in the USA and China”