Back in April I noted that it was obviously Geithner’s objective to bankrupt the FDIC and in doing so avoid having to go to Congress directly for more money:

I am not sure right now as to whether or not it is PPIP, or just the mounting bank failures alone, but as of tonight Mish notes that the FDIC has finally depleted its funds:

Bank Failure Friday is in full swing. Tonight there were 5 more failures, numbers 73 through 77 on the year. In the biggest failure since WaMu, BB&T Takes Over Colonial.

Colonial BancGroup Inc., the Alabama lender facing a criminal probe, had its banking operations closed by regulators and taken over by BB&T Corp. in the biggest bank failure since Washington Mutual Inc. collapsed last year.

Branches and deposits of Colonial, Alabama’s second-largest bank, were turned over to Winston-Salem, North Carolina-based BB&T in a deal brokered by the Federal Deposit Insurance Corp., the regulator said today. The failure of Montgomery-based Colonial followed a Florida expansion that saddled the lender with more than $1.7 billion in soured real-estate loans.

Colonial’s failure will deplete the FDIC’s deposit insurance fund by $2.8 billion, the agency said. The fund, which the agency uses to pay customers of a failed bank for deposit losses up to a $250,000 limit and is generated by fees paid by banks, stood at $13 billion at the end of the first quarter, according to the FDIC. The agency has set aside an additional $25 billion for bank failures, agency spokesman David Barr said.

Is There Any Money Left In The Fund?

Tonight, inquiring minds are asking “Is There Any Money Left In The Fund?”

As late as in the end of April just before the release of the bank stress tests, Ms. Bair Chairman of the FDIC said they would not need any additional bailouts from the U.S Treasury within the immediate future according to The Bulletin. After three new bank failures last Friday, the FDIC’s Deposit Insurance Fund (DIF) diminished by another $185 million for a total remaining balance of $648.1 million.

Below is a graph showing the DIF capital as a percentage of total bank deposits insured by the FDIC. Note that this graph is based on the old insurance limit with a maximum coverage of $100.000/account. This limit has been changed to cover up to $250.000/account until January 1st 2014. Estimates say that the change increases the deposits covered under FDIC insurance to approximately $6 trillion in total. 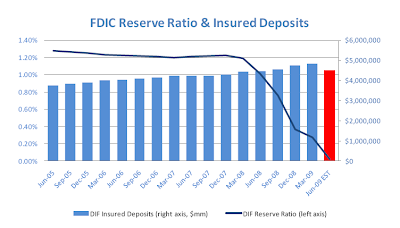 The current reserve ratio of 0.014%1 strongly indicates how bad this crisis has affected U.S financial institutions. However, this is not the entire story. If we take a closer look at non-current loans and charge-offs from banks one realizes that the FDIC still has a lot of work to be done. Combined non-current loans and charge-offs amounted to nearly $100 billion in Q109 compared to $15 billion/quarter pre-crisis. Moreover, according to analysts at the Royal Bank of Canada the U.S still has banking failures in the thousands to face before the crisis is over. In turn that should result in the FDIC requesting the pre-approved funding signed by the Congress in May 2009, including $100 billion from the U.S Treasury Department.

The FDIC estimates that the cost to the Deposit Insurance Fund (DIF) will be $6.8 million. PNC Bank, National Association’s acquisition of all the deposits was the “least costly” resolution for the FDIC’s DIF compared to alternatives. Dwelling House Savings and Loan Association is the 73rd FDIC-insured institution to fail in the nation this year, and the first in Pennsylvania. The last FDIC-insured institution to be closed in the state was Metropolitan Savings Bank, Pittsburgh, on February 2, 2007.

The FDIC estimates that the cost to the Deposit Insurance Fund (DIF) will be $2.8 billion. BB&T’s acquisition of all the deposits was the “least costly” resolution for the FDIC’s DIF compared to alternatives. Colonial Bank is the 74th FDIC-insured institution to fail in the nation this year, and the first in Alabama. The last FDIC-insured institution to be closed in the state was Birmingham FSB, Birmingham, on August 21, 1992.

The FDIC estimates that the cost to the Deposit Insurance Fund (DIF) will be $61 million. MidFirst Bank’s acquisition of all the deposits was the “least costly” resolution for the FDIC’s DIF compared to alternatives. Union Bank, N.A. is the 75th FDIC-insured institution to fail in the nation this year, and the second in Arizona. The last FDIC-insured institution to be closed in the state was Community Bank of Arizona, Phoenix, also today.

The FDIC estimates that the cost to the Deposit Insurance Fund (DIF) will be $25.5 million. MidFirst Bank’s acquisition of all the deposits was the “least costly” resolution for the FDIC’s DIF compared to alternatives. Community Bank of Arizona is the 76th FDIC-insured institution to fail in the nation this year, and the first in Arizona. The last FDIC-insured institution to be closed in the state was NextBank, Phoenix, on February 7, 2002.

The cost to the FDIC’s Deposit Insurance Fund is estimated to be $781.5 million. Community Bank of Nevada is the 77th bank to fail this year and the third in Nevada. The last bank to be closed in the state was Great Basin Bank, Elko, on April 17, 2009.

If indeed $641 million was all that remained of the DIF, the FDIC is now bankrupt. Of the $641 million left, Community bank used up 781.5 million and Colonial Bank $2.8 billion

Here is more from the Saxo Report

The real total cost for Q1 09 turned out to be almost twice the amount of the estimates. If that will be even close to reality for Q2 09 the FDIC’s DIF will (very) soon be out of funds completely. [Mish: as of tonight the DIF is bankrupt.]

We believe the main reason for this observation lies in a de facto relaxation of accounting standards, even before the FASB 157 amendment on March 15th earlier this year. Basically the relaxation allows banks to only write-off parts of their losses due to market impairment and they may themselves decide a fair price that the asset could have been sold for during normal market conditions to keep in their books. Allowing banks to control how they mark-to-market their assets, will likely backfire and when they ultimately end up failing, imply greater closure costs for the FDIC. From the graph [below] one can infer that the average yearly DIF costs/bank assets have increased at an alarming rate to almost reach 31% in 2008 and 2009. 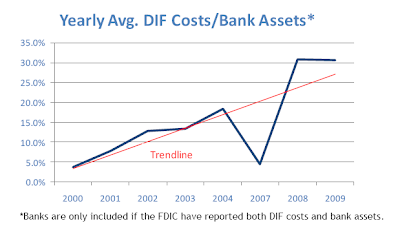 So, what does that imply? Basically it means that when valuating any U.S bank, their assets should probably be marked down significantly relative to their book value, much because of how they nowadays are allowed to manipulate their balance sheets in order to appear more solvent than they in fact are.

Friday, In reference to Colonial, Shelia Bair made the following galling claim:

“The past 18 months have been a very trying period in the financial services arena, but the FDIC and its staff have performed as Congress envisioned when it created the corporation more than 75 years ago,” said FDIC Chairman Sheila C. Bair. “Today, after protecting almost $300 billion in deposits since the current financial crisis began, the FDIC’s guarantee is as certain as ever. Our industry funded reserves have covered all losses to date. In fact, losses from today’s failures are lower than had been projected. I commend our staff for their excellent work in assuring once again a smooth transition for bank customers with these resolutions. The FDIC continues to stand by the nation’s insured deposits with the full faith and credit of the U.S. government. No depositor has ever lost a penny of their insured deposits.”

The Seen and the Unseen

Nowhere does “Shelia the Fool” state the cost of this insurance. Without FDIC, banks like Colonial, Bank United, Corus Bank, and possibly even banks like Washington Mutual would have failed long before they mattered.

By offering above market rates on CDs, those bank attracted plenty of capital to the detriment of banks lending responsibly. In order to offer high rates on CDs and deposits, the banks had to take high risks.

Bank United and Corus Bank funded all sorts of risky housing projects including condo towers in the biggest bubble cities. Colonial Bank is under investigation for Fraud.

No one in their right minds would have deposited money at those institutions without FDIC. And if they did it should be their problem not yours or mine.

Total Up The Unseen

There were no bank failures for a very long time during the credit boom. Thus, FDIC insurance seemed to work very well for a while. The reality is such schemes always produce fat tails.

If this is not an asinine model what is? Note this is a failure caused by regulation. There should not be an FDIC in the first place.

Shelia brags “In fact, losses from today’s failures are lower than had been projected.”

She needs a math lesson. The cost of FDIC is staggering, and the benefits are negative.