Markets everywhere are unanimously heralding a return to dollar inflation…

Inflation expectation is up:

Treasury yields are up (10 year Treasury Note yield below):

The dollar is dropping against major currencies:

Gas prices have been steadily rising since early December, when the national average was around $1.60 a gallon. But despite the recent rise, gas prices are still well below year-ago levels of $3.986 a gallon and last year’s all-time high of $4.114 a gallon.

But some are concerned that prices will continue to rise. Part of that has to do with the usual increase in demand for gas during the summer months.

In addition, rising hopes of a U.S. economic rebound have helped push oil prices higher as the dollar has weakened against other currencies. A weaker greenback tends to push up the price of oil since oil is traded in dollars around the world.

Emerging market indexes and commodities are surging as investor wealth pours in once again. Profligate US spending and skyrocketing deficits, hyper-loose monetary policies in this crisis, and collapsing confidence that the Fed will actually be able to withdraw such policies and excess liquidity when required, are all causing dollar inflation expectations to become deeply rooted in investor psychology.

The overpowering perception on the part of global investors that the Fed, Treasury and Administration are losing control of the US fiscal position, and that inflation (more likely hyper-inflation) is virtually becoming inevitable is threatening to wreak irreversible harm upon US finances and upon the dollar itself.

Actual market data, however, tells us the following:

Credit is imploding across the board…

Loans and Leases at Commercial Banks: 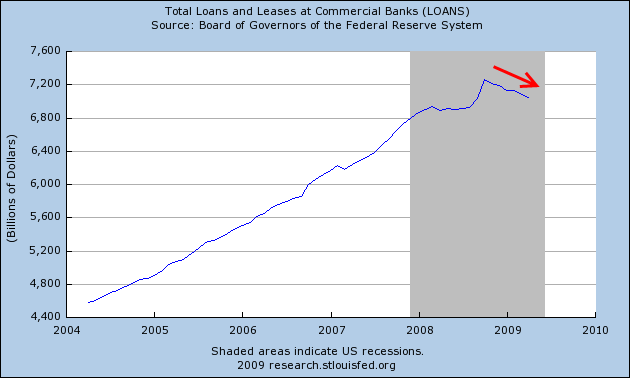 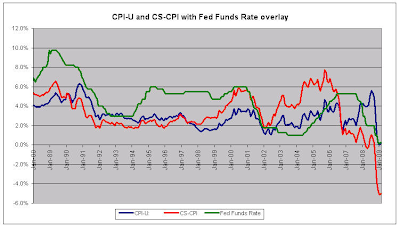 Greenspan ignored the effects of asset bubble like housing, by failing to take into consideration housing in the CPI. Real interest rates were -5% in mid-2004 and stayed that low for quite some time, spawning the biggest credit boom the world has seen. Now in spite of a Fed Fund’s rate that is zero, real interest rates are +5%.

According to the new Case Shiller report nationwide home prices dropped by 18.7%.

…this is not the stuff from which inflations are made.

I expect a reversal of market data to adjust to real conditions sooner or later. I think Treasury Notes will be a good call. The dollar should start to rise again against other currencies. I think gold is likely to do fine. It is merely back to where it was before the inflation fears began. Silver‘s excessive gains, however, may have partly been fueled by these inflation expectations. I would advise caution here. It may be time to ring the register on some silver gains and buy at another low.

2 thoughts on “Inflation Fears vs. Reality”