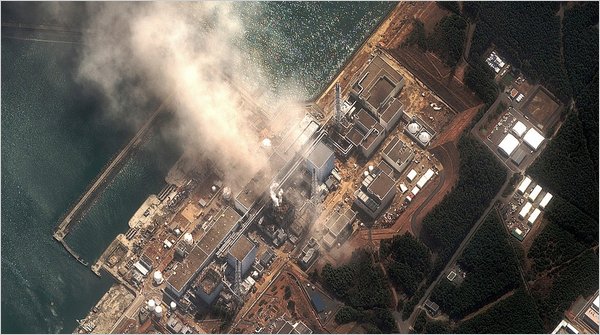 The No. 3 reactor building of the Fukushima Daiichi nuclear plant burned Monday after a blast following an earthquake and tsunami in this satellite image.

Japan’s nuclear crisis verged toward catastrophe on Tuesday after an explosion damaged the vessel containing the nuclear core at one reactor and a fire at another spewed large amounts of radioactive material into the air, according to the statements of Japanese government and industry officials.

In a brief address to the nation at 11 a.m. Tokyo time, Prime Minister Naoto Kan pleaded for calm, but warned that radiation had already spread from the crippled reactors and there was “a very high risk” of further leakage. Fortunately, the prevailing winds were sweeping most of the plume of radioactivity out into the Pacific Ocean, rather than over populated areas.

The sudden turn of events, after an explosion Monday at one reactor and then an early-morning explosion Tuesday at yet another — the third in four days at the plant — already made the crisis at the Fukushima Daiichi Nuclear Power Station the worst nuclear accident since the Chernobyl reactor disaster a quarter century ago.

Right now the Nikkei is down 10.5 percent after already having dropped over 6 percent yesterday …