Keynesians, at a loss to explain how the two phenomena can possibly co-exist, have to do what is completely inevitable: They need to make up an alternate reality. A fantasy world, in which their prescriptions of more government spending as the magical panacea to recessions where never tried.

In his never ceasing quest against reality, Paul Krugman joyfully continues to make fact free assertions, while at the same time accusing others of … yes … making fact-free assertions. :)

The answer to the second question — why there’s a widespread perception that government spending has surged, when it hasn’t — is that there has been a disinformation campaign from the right, based on the usual combination of fact-free assertions and cooked numbers. And this campaign has been effective in part because the Obama administration hasn’t offered an effective reply.

Actually, the administration has had a messaging problem on economic policy ever since its first months in office, when it went for a stimulus plan that many of us warned from the beginning was inadequate given the size of the economy’s troubles. You can argue that Mr. Obama got all he could — that a larger plan wouldn’t have made it through Congress (which is questionable), and that an inadequate stimulus was much better than none at all (which it was). But that’s not an argument the administration ever made. Instead, it has insisted throughout that its original plan was just right, a position that has become increasingly awkward as the recovery stalls.

And a side consequence of this awkward positioning is that officials can’t easily offer the obvious rebuttal to claims that big spending failed to fix the economy — namely, that thanks to the inadequate scale of the Recovery Act, big spending never happened in the first place.

But if they won’t say it, I will: if job-creating government spending has failed to bring down unemployment in the Obama era, it’s not because it doesn’t work; it’s because it wasn’t tried.

OK, Krugie. How about we have a look at some … you know … facts? Because, you’re absolutely right, making fact-free assertions is a bad bad bad! Here is the latest chart on total US government spending as % of GDP, that is all federal, all state, and all local expenses, even including federal grants. This chart does not include any estimates except numbers before 1948. All recent numbers are 100% finalized: 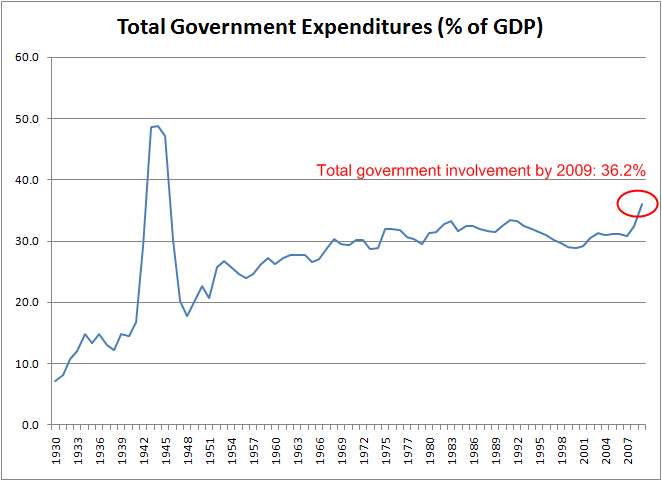 Just for the sake of 100% certainty, I am not including the projections for 2010 and the following years, but only confirmed and finalized data!

I mean, this stuff is out there, at the click of a Search button, readily available to anyone who is unbiased, curious and interested in truth and objective analysis. So why is it that a Paul Krugman would ignore it? Hmmmmmm … really really I wonder … :)

Luckily there is a very simple and uncomplicated solution … tune out from such clowns.

I will below list the most popular counter “arguments” to what I wrote above:

This is almost a given for bigots. When they see relative numbers they will tell you that spending only went up as % of GDP because GDP fell, because, you see, we are in a recession and so all the stuff I wrote above doesn’t count!!

OK, then let’s have a look at the absolute numbers, in $ billions:

Once people see that their assertion is completely wrong they will have to adjust the numbers to their liking. When reality doesn’t conform with bigoted ideas, then reality has to be modified. The inevitable outcome is that they will start excluding certain categories of government spending, with the objective of finally arriving at an adjusted number that fits in their small mental box.

TARP is a popular one because, you see, it will be paid back!

To that I can only say: That’s great! So then once it does get paid back, and Congress, in its almost infinite wisdom and fiscal prudence, decides to pay it back to the people without borrowing any more money, then I will gladly review the budget numbers at that time and be impressed by how much the budget declines in that year.

But as it stands currently, the money has been spent and pumped into circulation. So how about we observe actual, current numbers that we know of, and don’t make up an alternate reality or pretend to know the future?

I have my own predictions: I say none of this money will be paid back to the people, it will all be spent on other programs. But am I using that as part of my current argument? No. Because it is a guess, albeit one that I believe is a bit more accurate and a bit more based on economic history of, say, the past 5000 years of public finances. But I may be wrong and I would gladly stand corrected.

At any rate, such guesswork is completely misplaced when it comes to observing actual numbers.

But the good thing about a logical and consistent position is that it doesn’t matter what you throw at it. It stands on a firm and unassailable structure.

So let’s say TARP is completely irrelevant and the money is magically to be excluded from the calculation. The total actually handed out under TARP at this point is $356 billion. So let’s deduct that number, in equal proportions from the budget of 2008 and 2009, just for the sake of these people’s argument, just to try to make it as easy as possible for them:

10 thoughts on “Krugman’s Nonsense on US Government Growth”