ZeroHedge reported a few days ago that Trump’s pick for Treasury Secretary suggested in an interview with CNBC that he’d be open to issuing new bonds of longer term maturity:

“I think interest rates are going to stay relatively low for the next couple of years.” Mnuchin told CNBC. “We’ll look at potentially extending the maturity of the debt, because eventually we are going to have higher interest rates, and that’s something that this country is going to need to deal with.” Ironically, with that statement, Mnuchin quickly sent yields spiking higher, although courtesy of foreign buyers these were promptly renormalized. 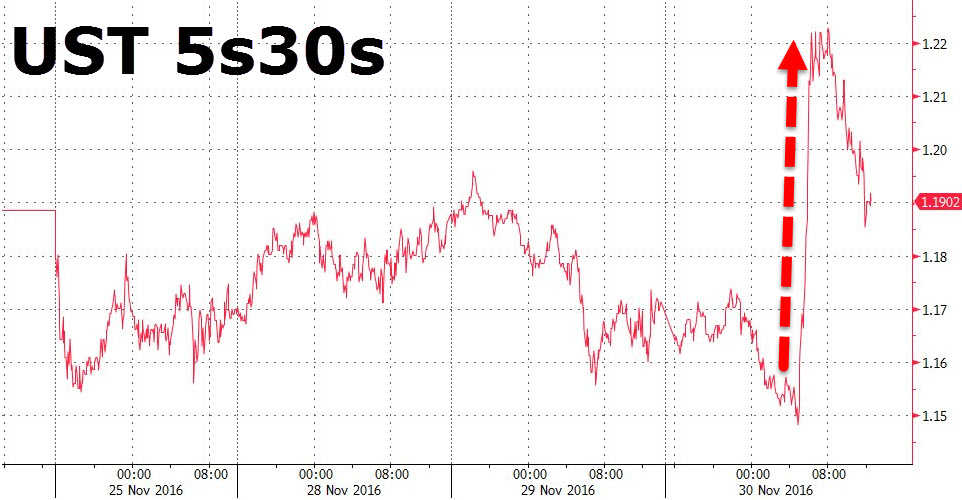 The mini selloff in Treasury securities on that day could have been prompted in part by anticipation: When longer bond options become available a certain portion of long bond investors while invariably sell off a portion of their current holdings to reach for the higher yield.

For example, investment strategies such as the permanent portfolio (which I follow) require you to allocate 25% to the safest & longest government bonds denominated in your local currency.

On the net such a move would simply be a gift to such long bond investors, since longer maturities offer more upwards punch precisely when needed, that is when deflationary pressures prevail and interest rates plummet. Furthermore longer maturities pay higher interest rates, essentially a risk free subsidy to those with money to invest in this manner.

If you’ve read my post about Modern Money Theory you’ll understand that most other reasons cited by Mnuchin don’t make much economic sense, since the government doesn’t really “need” to borrow money or issue long term debt at all:

Why sell longer term government bonds like the Treasury does, effectively setting a risk free rate and thus a floor for longer term loans? Again a good question! In fact, MMT ultimately suggests that beyond very short term Treasury Bills at most there’s really no reason for the government to be floating long term bonds.

Within the confines of today’s fiat money system, MMT actually offers the most libertarian alternatives regarding interest rate management and government bonds: let the overnight rate go wherever market conditions amongst private banks let it go, and don’t issue any long term government debt at all!

And in Why The National Debt Doesn’t Matter I explained:

When the Treasury pays interest on the public debt, it does so by asking the Fed (the banks’ bank) to mark up the recipient’s bank’s bank reserves via electronic keystrokes. It doesn’t need to raise taxes anywhere in order to perform this operation.

On that same token, when the Treasury retires a maturing government bond, it asks the Fed to remove said bond from the bondholder’s bank’s securities account and in turn marks up said bank’s bank reserve account accordingly. Once again, no tax money is needed to perform this operation. No future generations, to cite a popular cliche, are being asked to cough up the money to perform this operation.

And on Mnuchin’s claim that we’re “going to have higher interest rates, and that’s something that this country is going to need to deal with”, I’ve pointed out the following in that same article:

How many bonds are outstanding, at what maturity, and how much interest we wish to pay on them, are both 100% present-day political decisions that the federal government can make independently of the private sector. Theoretically, all outstanding bonds could be replaced by bank reserves that pay zero interest. All that would happen, in that case, is that one type of government obligation (government bonds, the promise to pay future bank reserves) is replaced with another government obligation (bank reserves, the promise to accept them to settle tax liabilities).

In other words: In a sovereign floating fiat money system rates on government bonds are always under the government’s control, letting them float is a choice, not an imperative.