McCullough of Hedgeeye writes Is this finally the economic collapse?:

FORTUNE — The Great Depression. Wall Street in 1987. Japan in 1997. Points of economic collapse are generally crystal clear in the rear-view mirror. Professional politicians in Japan have been telling stories for 20 years as to why they can prevent economic stagnation. In the US, the storytelling started in 2007. All the while, stock market and real-estate prices have repeatedly rallied to lower-highs, then collapsed again, to lower-lows.

Despite the many differences between Japan and the US, there is one similarity that continues to matter most in the risk management model my colleagues and I use at Hedgeye, our research firm — debt as a percentage of GDP. Now that the US can’t cut interest rates any lower, the only option left on the table is what the Fed just announced it would start doing — buying Treasury debt. And that could lead the country to the brink of collapse: According to economists Carmen Reinhart & Ken Rogoff, whose views we share, crossing the 90% debt/GDP threshold is the equivalent of crossing the proverbial Rubicon of economic growth. It’s a point from which it’s almost impossible to return.

On July 2nd, we cut both our third quarter 2010 and full year 2011 GDP estimates for the US to 1.7%. At the time, the consensus around US economic growth estimates was about 3%. Now we’re starting to see both big brokerage analysts and the Federal Reserve gradually cut their GDP estimates, but not by enough. Even our estimate for 2011 is still too high.

Slowing growth, both domestically and in China, is core to our bearish views on both the strength of the US dollar and US equities. There will be a downward bias to our US growth estimates as long as debt-financed-deficit-spending continues to be the solution politicians and central bankers turn to as a fix to our financial crisis.

Markets trade on expectations. Yesterday’s zig-zag in the S&P 500 was unlike most sleepy August trading days in America. That’s because the ‘government is good’ crowd leaked word that this second round of “quantitative easing,” known as QE2, was coming, and that Ben Bernanke was going to respond to our buy-and-hope begging. (The first round of quantitative easing was the Fed’s unprecedented purchase of agency debt to prop up the housing market, along with credit facilities for big banks, which began in 2008 and ended earlier this year.)

To think that we have institutionalized market expectations to this degree is downright frightening. It seems impossible but true that all rallies start and end with rumors about what Fed Chairman Ben Bernanke, a humble looking man of government, had to say at 2:15 PM EST yesterday afternoon, or any other day he makes a statement.

With 40.8 million Americans on food stamps (record high) and 45% of the unemployed having been seeking employment for 27 weeks or more (record high), what’s left if (or when) QE2 doesn’t kick start GDP growth? Should we start begging for QE3? Should we cancel the bomb of the National Association of Realtors’ existing home sales report, scheduled for public release on August 24th? Or should we bite the bullet and accept that current economic policy dictates 0% returns-on-savings, even as Washington continues to lever-up our future to the point of economic collapse?

Before the Fiat Fools — Hedgeye’s name for political actors and bankers who have placed their hopes of economic recovery in printing endless supplies of new cash — run out campaigning for QE3, maybe they should analyze some real time market results to yesterday’s announcement of QE2:

1)The US dollar is battling for resuscitation after 9 consecutive down weeks — down 9% since June.

2) US Treasury yields are making record lows on the short end of the curve, with 2-year yields striking 0.49%.

3) The yield spread (in this case the difference in return between 10-year and 2-year Treasury bills, which shows a long-term confidence when high) continues to collapse, down another 4 basis point day-over-day to 223 basis points.

5) US Volatility (VIX) is spiking from its recent stability.

6) In Japan, long time quantitative easing specialists found their markets closing down overnight by 2.7%, which makes them down 11.9% for the year to date.

Lest our doom and gloom seem built entirely on technical measurements, what they boil down to is actually quite simple — an idea about our country which dates back to 1835. Alexis De Tocqueville, author of Democracy in America, which was published that year, seemed to warn of this day when he wrote: “The American Republic will endure until the day Congress discovers that it can bribe the public with the public’s money.”

What I have seen mentioned on several occasions now is the 90% debt threshold as the “ok-now-we’re-definitely-screwed”-indicator. I think it’s based on historical research but then it seems a little arbitrary in the big picture because the true public US debt is of course already waaaay past that, more like 385% of it.

I agree on most of the market outlook, and in particular I have been following and predicting ongoing strength in Treasurys, alongside consistently falling mortgage rates and interest rates in general.

It seems like the author is suggesting some weakness in the dollar when actually the Dollar has just been taking a little break for a few weeks from a fundamental rally. A rally that I expect to resume against other major currencies (including the Yuan, but probably excluding the Yen), when the market begins to tank seriously again.

And here’s Mish, as always an avid watcher of the Yield curve, noting that 2 Yr Yields are below 0.5% for the first time ever:

Curve Watchers Anonymous is once again watching the yield curve. Here are a couple of charts. 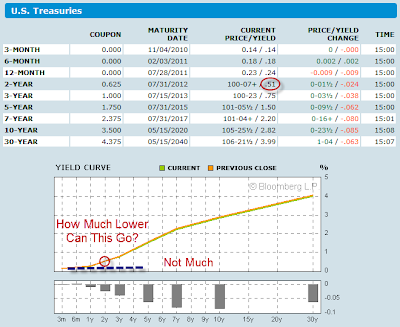 The following chart shows the yield curve over time. 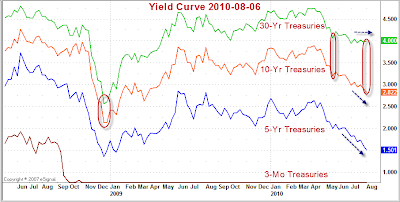 The chart depicts weekly closes. 10-year yields did slightly exceed 4% in April but those highs do not show in the above chart. Thus, the decrease in yields is even more dramatic than shown.

Note the huge rally on 5 and 10 year treasuries as compared to the 30-year long bond. It appears as if someone is putting on a long-10 short-30 spread.

If the economic data continues to be poor (and I believe it will be), the low in 10-year yields may not even be in even if the low in the 30-year long bond is in.

So much for the idea that an end in the Treasury rally is near … expect the Dollar to catch that wind again soon.