Obama also has proposed a three-year freeze on most domestic spending, beginning in the budget year that starts Oct. 1. Spending related to Medicare, Medicaid, Social Security and national security would be exempt.

OK, so Medicare, Medicaid, Social Security, and spending on war, killing people, dropping bombs, etc. will be exempt from this “spending freeze”. I wonder why?

Maybe a quick look at your average annual federal budget will help clear this up, I am here using the federal government’s budget for 2010: 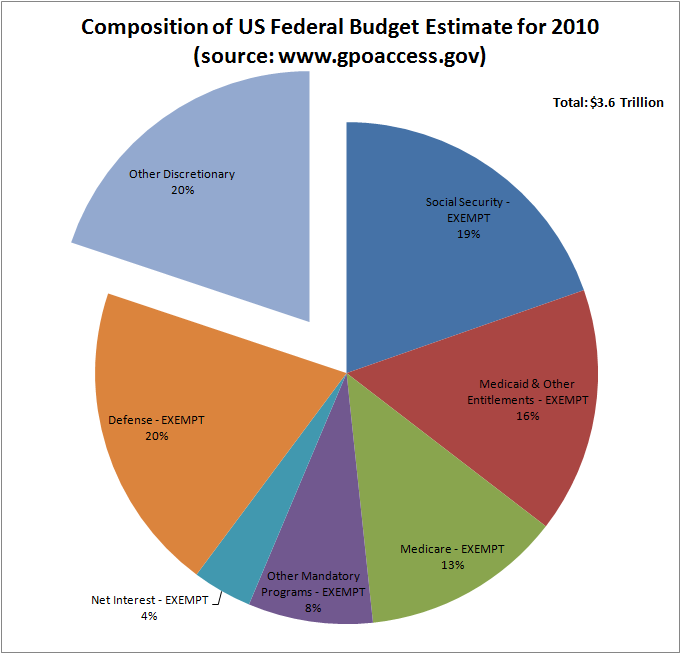 The only category above that is not surely exempt from the “spending freeze” is “Other Discretionary Spending”, 20% of the total budget. Note that nobody talks about cutting any of that. It’s merely going to stay where it already is.

Meanwhile, on the remaining 80% we are being blatantly assured by the President, by virtue of the fact that he is exempting them from the outset, that they will in fact continue to grow moving forward.

On top of that, even out of those 20% of other discretionary spending there is certainly some of it that falls under one or the other holy cow categories, namely Military, Medicare, Medicaid, or Social Security. Thus the total subject to the freeze is rather around 12.5%

As Mish points out:

This is so ridiculous I don’t know how the administration is not embarrassed to death to present it. Moreover “The freeze would be measured overall and would not be applied across the board.” The freeze is only for three years.

How can anyone in the Administration expect to be taken seriously about budget deficits after presenting this ridiculous plan?

What the administration is serious about is a strategy of extend and pretend. The sheeple are upset about budget deficits, so what do they get? The president announcing a spending freeze (that is none), endorsing a “deficit reduction task force” and talking day in day out about the importance of “tacking the deficit”, while simultaneously spending $787 billion on a stimulus, pushing through another $150 billion for a “jobs plan”, and spending more than any previous administration on wars.

By the way, the deficit task force got rejected in Congress … it is pretty amazing that they can’t even agree on at least talking about deficits, so please don’t even dare to think that they will actually do anything about it, other than of course raising your taxes as they always have.