Clearly one of us is wrong. But whom? Perhaps this image can help. 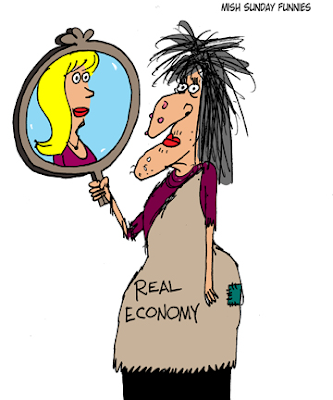 Throwing money at problems never works in the long run.

Japan tried that and now has debt to GDP of 200%. Because of its aging demographics, Japan is in serious trouble as soon as interest rates rise. Japan will not be able to finance its monstrous debt nor will it be able to grow its way out of the problem. Such is the nature of compound interest and unsustainable levels of debt.

Greenspan’s policies seemed to work, but it was nothing but an illusion. The real economy was taking a nosedive even as financial assets soared. It was a nice party, as all Keynesian parties are, but in the final analysis all Greenspan and Bernanke accomplished was to dig the deepest debt hole mankind has ever seen. The housing and debt implosion of 2007-2008 was the direct result.

It will always be too early for you. There is no recovery nor will there ever be a recovery until there is genuine demand for goods and services at prices set by the free market not the government.

When the problem is debt, going deeper in debt cannot possibly be the solution.

We had a chance to write off the debt and to let the insolvent banks go under. Instead we wasted over a trillion dollars bailing out banks that still are not lending (and wisely will not lend) because we never purged the debts that needed to be purged nor did we reduce rampant overcapacity.

We could have and should have forced the bondholders of Citigroup and Fannie Mae to take a hit. Instead, taxpayers who cannot possibly afford it, bailed out wealthy bondholders.

In addition, we tried all sorts of Keynesian nonsense like cash-for-clunkers and an$8,000 tax credits for houses. As soon as the tax credit expired housing went in the gutter. It is about to do so for the second time.

Bernanke will not know what hit him even though it is point blank foolish to stimulate housing when there is an ocean of housing oversupply already.

By the way, how many roads can you pave? We paved roads in our area that did not even need to be paved. Now fooking what?

This is exactly the mistake Japan made. Yet you want to repeat it with more absurd makeshift work.

The stimulus money is nearly out and you want more. You will always want more for the simple reason there is no real demand for goods and services, only an illusion of a recovery that comes from passing out “free money”.

When you look in a mirror you see the illusion, what you should see is a Keynesian warthog. Substitute the words “Keynesian Economics” for “Real Economy” on that hag, and the picture is perfect.

As Europe found out, the will and the means to pass out “free money” is 100% guaranteed to end before a lasting recovery can take hold.

That dear Paul, whether you like it or not, is the mechanics of peak debt, compound interest, global wage arbitrage, and something you desperately need to learn: Austrian economics.

Paul, you need help. I suggest a few books on my recommended reading list.

I couldn’t agree more, those are excellent reads indeed.