Protests in Spain continue in spite of a recently imposed ban: 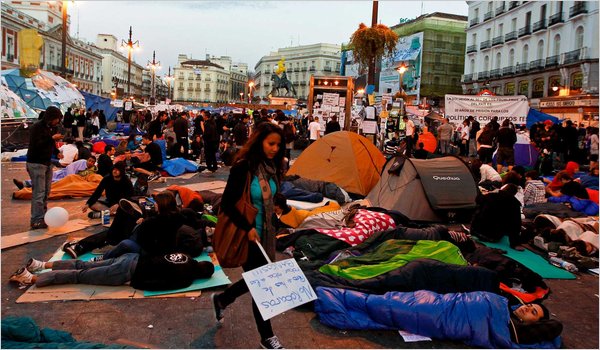 Tens of thousands of demonstrators across Spain continued sit-ins and other protests against the established political parties on Saturday. They did so in defiance of a ban against such protests and ahead of regional and municipal elections on Sunday.

About 28,000 people, most of them young, spent Friday night in Puerta del Sol, a main square in downtown Madrid, the police said. They stayed even as the protest ban went into effect at midnight under rules that bring an official end to campaigning before the election in 13 of Spain’s 17 regions and in more than 8,000 municipalities.

Fueling the demonstrators’ anger is the perceived failure by politicians to alleviate the hardships imposed on a struggling population. The unemployment rate in Spain is 21 percent.

Beyond economic complaints, the protesters’ demands include improving the judiciary, ending political corruption and overhauling Spain’s electoral structure, notably by ending the system in which candidates are selected internally by the parties before an election rather than chosen directly by voters.

Young Spaniards are fed up with a regime that has wrecked the country’s economy and gets more and more corrupt by the day. This is always and everywhere the inevitable price of statism. Asking for a different flavor of it will change nothing fundamentally in the long run. Voluntaryism will …

I was happy to see someone recommend that post in a comment on Nobody Expects the Spanish Revolution:

It looks to me like the teenage leftists of the European Union require a direction and a purpose.

The market economy is the only thing on your side, young spaniards, it’s the only thing that provides you any measure of freedom and self-realisation. It’s also the only economy you have, and thus the only source of actual material wealth. By interfering with it you’re only going to produce less wealth, less jobs and more suffering. Yes, government is a massive problem which must be dealt with, but ‘democracy’ is not the solution. The solution is liberty: have the government withdraw interference from markets, eliminate ‘social services’ (every Euro spent by the government is another stolen from the productive market, meaning less real wealth and less sustainable jobs.. and how is it a ‘service’ if you’re forced to pay for it?), eliminate anti-market corporatism (limited corporate liability, patent law, bailouts, anti-trade taxation, fiat currency monopoly, all anti-competitive laws) and by doing so eliminate the corporatist problem while retaining the economic liberty to have a thriving economy. Because just demanding more socialism will only produce more economic problems, and you’ll never make any forward progress.

I’m not advocating a conservative position, in general conservatives tend to talk about economic freedom but in practise are just a bunch of cowardly prohibitionists, corporate whores and opponents of personal liberty. What I’m saying is that democracy and socialism are no better than fascist corporatism, you’re still going to be left with the same problems of massive corruption, very little economic progress and a ruling elite who don’t give a damn about you and your rights. The further you push to the left, the worse your problems will become. You won’t achieve anything positive for yourself or for Spain using coercive violence.

Please take a moment to consider the anti-coercive anarchist philosophy of Voluntaryism as an alternative to the further perpetuation of personal and economic oppression:

Revolutions are pointless things, they always return you to the same point you started at. Even the American revolution ended in tyranny and taxes. Lets try and aspire to something better than just another turn of the wheel…

Italy had its credit-rating outlook lowered to negative from stable by Standard & Poor’s, which cited the nation’s slowing economic growth and “diminished” prospects for a reduction of government debt, according to an S&P statement sent late yesterday. S&P affirmed Italy’s A+ long-term rating, the fifth-highest, and its top-ranked A-1+ short-term rating.

In Italy, “diminished growth prospects stem from what we consider to be a lack of political commitment to deregulating the labor market and introducing reforms to boost productivity,” S&P said. “We believe measures to reduce the bottlenecks and rigidities in Italy’s economy are especially important in light of Italy’s limited monetary flexibility.”

The negative outlook implies a one-in-three chance that Italy’s ratings could be lowered within the next 24 months.

Italy is headed for a recession, that’ll make the required adjustments all the more tough on its citizens. In a currency union without fiscal union such measures will only happen in the 11th hour.

This is exactly what I meant when I wrote Imbalance Increases in Eurozone over 2 years ago:

The fact that a bailout of some Euro states by others is discussed, just shows how torn this European Union really is, how severe its imbalances are. With discrepancies like these, it is completely unfeasible to maintain a currency union. The Euro will keep taking its beating for it.

European member states needs to come to their senses. An absolute and unconditional abandonment of any more bailout talks is highly necessary. Member states need to consolidate their finances, cut spending, trim down their obtrusive bureaucracies and cut their unsustainable tax burdens. Germany, France, and Italy should be leading the way in these efforts. The European Commission needs to put an end to its disastrous policy of subsidizing agriculture.

Individual responsibility per member state rather than complete collectivism should be aspired. Unfortunately Europe has not been very keen on individual responsibility. In Germany, France, and Italy, all one can hear is rants about “neoliberalism”, “anarchism”, “capitalism on steroids” which supposedly are to blame for the financial crisis.

The sentiment in the US is not at all different. As the US economy continues its decline, Europe is unwittingly joining the bandwaggon.

Also, look at what I said about Greece back then:

What do you think is going to happen once these plans, too, prove completely unsustainable and everyone acts surprised and rushes back to the table?

Every single time debates were raging about whether or not they should be bailed out by other member states the exposed banks’ and the governments’ propaganda minions out there would tell us that this particular bailout would solve the structural problems at hand, and every time people on the other side would say that they won’t and that we’ll be having the same debate a few years from then. Then the inevitable happens and everything these pro bailout minions were wrong on suddenly doesn’t matter anymore and we’re repeating the same debate.

Every media push in support of bailout measures is thus nothing but a temporary and concentrated effort to push a particular program across the finish line, and all tools and weapons in the propaganda arsenal are considered fair to make it happen. What happens afterwards is completely irrelevant to these people.

The cycle of screwing the future via government budget deficits always requires that future generations suffer for excesses of the past, be it via increased taxation or via a default on false promises made.

That future you’ve been hearing people talk about for decades is no longer future, it is here and now.

Truth is the enemy of statism, always and everywhere.