I have said it many times. The scourge in the US system is not a lack of credit, “tight credit“, “frozen credit”, or whatever else the Bernankes, Geithners, and Obamas would have us believe. Nor do we need to get “credit flowing again”, “consumers borrowing again” or anything remotely close to it.

We need the opposite: Savings. We got to where we are because of too much debt and credit. People over leveraged themselves into bankruptcy, they are sick and tired of debt. Borrowing has plunged and consumer credit will continue to contract precisely for that reason.

Rarely does anyone stop and ask the question: “Do people actually want to borrow any more money?” Of couse they don’t, why in the world should they?

Maria O’Brien, a 27-year-old free-lance writer, and her husband are planning to do something later this year that they would have thought crazy in the past: buy a minivan — with cash.

“It’s worth the sacrifice right now to get out of debt,” Mrs. O’Brien said. “It means living more frugally, but also more freely.”

Banks are under fire for not lending enough and for tightening terms of credit, contributing to a drop in U.S. economic activity. But as the O’Brien family illustrates, the loan market’s shrinkage isn’t just about the supply of credit. It is also about weak demand for credit, a byproduct of households and businesses wary about the economy.

I would actually contend that the sole reason for lack of lending is the weak demand for credit. Banks have been flooded with excess reserves: 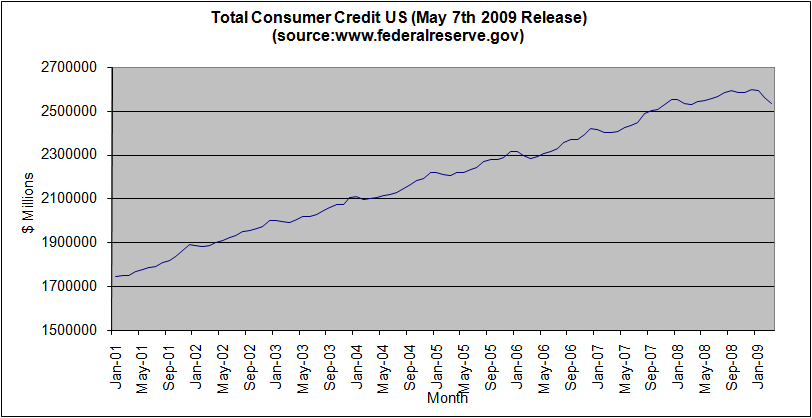 She goes on to write:

“Lending money is the bread and butter of banking,” said James Chessen, chief economist for the American Bankers Association. “The money is there, but banks are running smack into a wall of poor loan demand.”

The O’Briens, who live in Front Royal, Va., with their three children, are putting aside at least $500 a month toward the purchase of a used minivan in the $6,000-$8,000 range. They are also imagining a debt-free future.

“Once we get rid of it, we’re never going back,” Mrs. O’Brien said.

As consumer spending contracted last year, growth in household borrowing screeched to a halt in the fourth quarter after growing at a 10% annual clip earlier this decade, according to the Federal Reserve.

“We’re in a recession, and it’s one where households came in highly leveraged,” Fed Chairman Ben Bernanke said recently. Combined with firms “cutting back on their investment,” he expects to see weak demand for loans.

Loan demand began to fall sharply toward the end of last year and continued to weaken in the first three months of this year, according to the Fed’s periodic survey of bank senior loan officers. A pick-up in demand for mortgage loans is a notable exception.

In the latest survey, for instance, 18 banks said demand was moderately or substantially weaker than three months earlier, but only nine said it was moderately stronger. On balance, the Fed said, 60% of U.S. banks reported weaker demand for commercial and industrial loans.

The O’Briens have long dreamed of being debt-free. But they began to pay off loans more aggressively after Jeff O’Brien’s construction work dried up last year, leaving them at times without steady income to support mortgage, car, credit-card and student-loan payments. Mrs. O’Brien took on more free-lance work, while her husband transitioned into a career as an insurance adjuster.

In the meantime, they have scrimped and saved to pay down a third of their $30,000 credit-card and student-loan debt and sold Mr. O’Brien’s beloved Ford truck to eliminate that monthly payment. Aside from the mortgages on their two houses — one they live in, and one they rent out — they are planning to be debt-free by next April.

“Once we do that, we’ll tackle the mortgages,” Mrs. O’Brien said.

“We’ve got money to lend, it’s just that people were so nervous about what was going on in the economy,” Ms. Aker said. “So many people had lost jobs or were afraid they’d buy a car and then GM wouldn’t be around anymore to honor their warranties.”

More than two-thirds of Arizona Central’s $285 million loan portfolio are vehicle loans; the rest is comprised of other types of consumer loans and a small amount — about 10% — are small-business loans.

Across town, the National Bank of Arizona, primarily a business lender, is seeing a similar drop in demand. Business applications for new-equipment leases tumbled 28% in the first four months of this year, compared with the same period in 2008. Loan applications from small businesses are down 11.5%.

“Deal flow just came to a screeching halt” late last year, said Brent Cannon, executive vice president at the bank. He added that because many small businesses use their home equity as collateral, woes in the Phoenix real-estate market threaten to keep a lid on demand.