For the sake of grasping the futility of spending time sifting through politicians’ arguments, I want to point out a prime example.

This is Ben Bernanke on Quantitative Easing:

“The best way to continue to deliver the strong economic fundamentals that underpin the value of the dollar, as well as to support the global recovery, is through policies that lead to a resumption of robust growth in a context of price stability in the United States,”

OK, so this of course means absolutely nothing to any mortal person. Nor is it supposed to. It’s yet another innocuous, dumb, and boring front to pure and simple theft.

“This approach eased financial conditions in the past and, so far, looks to be effective again. Stock prices rose and long-term interest rates fell when investors began to anticipate the most recent action. Easier financial conditions will promote economic growth. For example, lower mortgage rates will make housing more affordable and allow more homeowners to refinance. Lower corporate bond rates will encourage investment. And higher stock prices will boost consumer wealth and help increase confidence, which can also spur spending. Increased spending will lead to higher incomes and profits that, in a virtuous circle, will further support economic expansion.”

OK, as you know I would argue that it is simply ridiculous so consider a coerced cheapening of interest rates when people are sick and tired of debt anyway, and a simultaneous increase in the cost of purchasing shares in companies’ profits a success by any means. Furthermore it is even more ridiculous to look at month to month movements to proclaim success or failure of any policy, while disregarding the long term effects that always inevitably ensue!

But let’s forget about that for a second. Let’s measure the immediately proclaimed success by Bernanke’s own standards. Surely if he says that all those measures moved into a desirable direction over the course of a month or so, it would most certainly be undesirable if they moved in the other direction by even more, right??

What has happened since Nov 4th with stocks?

What has happened to long term rates since Nov 4th? 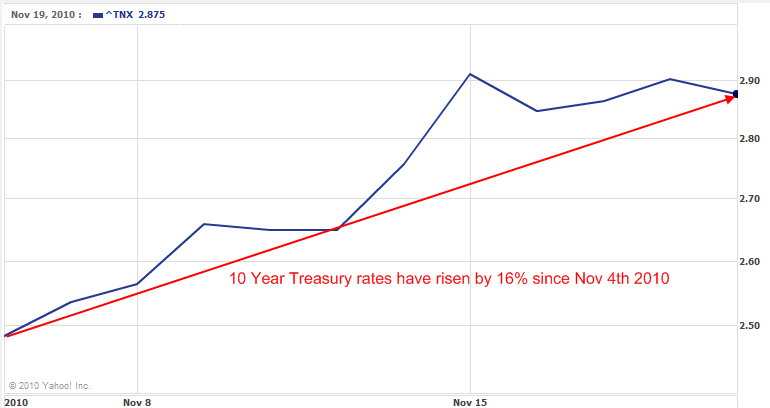 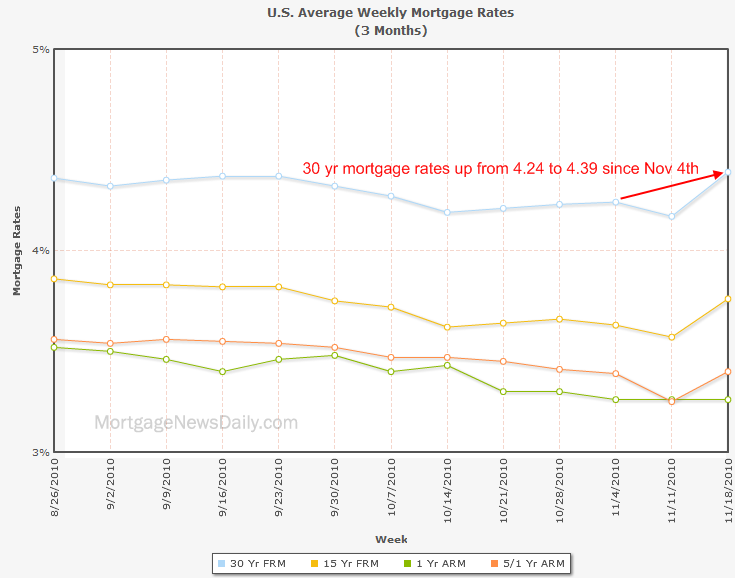 OK, so now that all these figures have blown up right in Bernanke’s bearded face, he’s surely going to step up to the plate and admit failure immediately, right?

Just kidding … I’m just posting this as one example as to why you should not spend a second listening to bureaucrats’ arguments that are designed to defend their own policies.

To those hopelessly lost, twisted, and clueless souls who seriously believe that 1. Fed independence (=secrecy) is a good thing and 2. the Fed is actually in any way, shape, or form independent from the government: Maybe the fact that Bernanke Met With 24 Senators After Renomination as Fed Chief will interest you:

Federal Reserve Chairman Ben S. Bernanke had conversations with 18 of the 23 legislators on the Senate Banking Committee prior to their 16-7 vote this month to recommend that the full Senate confirm him to a second term.

The Fed chief had contact with 24 senators between August 4 and Nov. 30, almost all at congressional office buildings, after his Aug. 25 nomination to another four-year term as chairman by President Barack Obama. The meetings and phone calls were listed in a daybook provided by the Fed yesterday in response to Freedom of Information Act requests by Bloomberg News.

Bernanke also met with House lawmakers, including Majority Leader Steny Hoyer of Maryland and John Larson of Connecticut, chairman of the House Democratic Caucus. He lunched with Republican members of the House Ways and Means Committee on Sept. 16, and spoke the same day at a Rhode Island Business Leaders Day event sponsored by Senator Jack Reed, a Democrat on the banking committee.

… seriousy, I wonder if these clowns they send in again and again to defend secrecy, bailouts, and cronyism are actually highly unreceptive robots, smuggled in from Japan.

Their nonsense is debunked in every single conversation, then someone hits reset, puts on a new skin, and back in action they are!!

I agree (believe it of not) with a few statements that Bernanke made in the recent hearing.

In this statement I agree that the Fed has made available lots of reserves, but the banks are not loaning those out:

And in this one I agree with the fact that, even though base money supply has exploded, broader money measures are not necessarily growing rapidly:

Ron Paul is very adamant about the issue of inflation. But what he is talking about is monetary inflation, not total inflation. In doing so he is missing the point. The problem with the current Fed policies is not that they will be sparking another inflation. The problem is that they slow down and prolong the current correctional period, the deflation that is going on right now.