A group of around 400 homeowners in Shanghai demonstrated publicly and damaged a showroom operated by their property developer after the company said it cut prices. Home buyers had wanted to speak with the developer to refund or cancel their contracts but were unsuccessful, according to local media. One report said the price cuts exceeded 25% per square meter. MarketWatch notes that the bubble has begun to burst:

Take a look at the Chinese situation. The bubble has been as big as any we’ve seen.
(…)
Ten years ago, homes in Shanghai sold for about six times an average family’s income. Today that’s 13 times. Shenzhen has gone from five times to 14 times. These are off-the-charts absurd ratios. This is a bona fide mania.

And it works fine until the music stops.

Where are we now?

Prices have started falling. Now, fewer than 46 of 70 major cities saw prices stall or decline in September, reports the National Statistical Bureau. As recently as January the number was just 10.

A 30 per cent drop in property prices would precipitate a collapse in fixed investment in China and the country’s investment-driven economy would experience a so-called hard landing after years of annual growth above 9 per cent, according to UBS economist Wang Tao.

From Bloomberg, On the Move in Asia:

Some posts I wrote before on China:

Rally in Chinese Stocks – Time to Kiss it Goodbye and Cash Out:

China’s growth is a mirage, its bubble a monstrous one, its impending crash completely inevitable.

China will not be immune to this global slowdown, in fact it may be leading it.

Update: Another important post I wrote about the macro environment in China, in particular money supply:

The Chinese money supply figure that is closest to my True Money Supply in the US is M1 as reported by the People’s Bank of China: 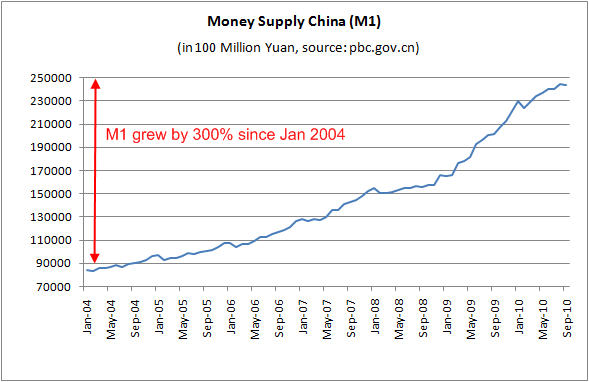 The money supply in China has easily tripled over the past 6 years.

And here is a comparison between the money supply growth rates in the US and China: 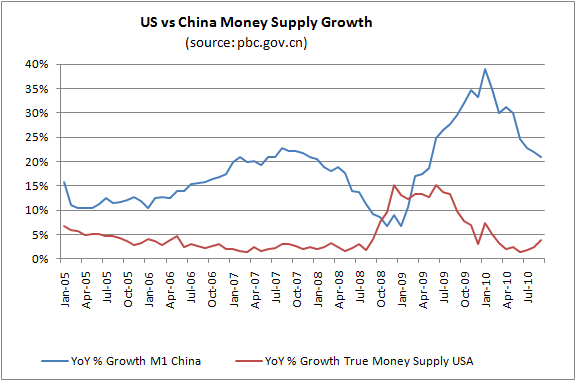 Money supply and credit supply have both been exploding in China, while money supply in the US has rather stagnated or at least grown a lot slower alongside contracting credit.

This is the main reason why I don’t think that the Yuan will remain strong against the US dollar for very long, and it is also why I don’t think the Chinese bubble can continue for much longer, but then … bubble often times last a lot longer than you’d expect.

The only way how the Yuan can maybe remain strong against the US$ for a sustained period of time, in my view, is if the PBC tries to cheapen the Dollar by selling reserves against Yuan, which in turn would exert an upward pressure toward exports from the US into China while having the adverse effect on Chinese exports, and thus hurt China’s politically powerful export lobby.

However, such a policy, too, would find its natural boundaries in the amount of Dollar reserves accumulated by the PBC.

To follow up on what I wrote in March China’s slowdown continues:

HONG KONG (MarketWatch) — China’s manufacturing activity expanded in May at its weakest pace in three quarters, as the economy faced headwinds of high inflation and government efforts to rein in prices, according to rival surveys of companies released Wednesday.

One line caught my eye immediately:

However, analysts said Wednesday that the weaker growth implied in the PMIs isn’t likely to sway the government from its current policy direction, with Credit Suisse analysts saying that “Beijing is fine to see a softening in growth.”

… and a softening in growth is what Beijing is gonna get.

Its economy contracted by 1.2% in the first three months of the year compared with the previous quarter, the latest government figures showed.

The government said flooding and cyclones in the resource rich states of Queensland and Western Australia had a significant impact on growth.

Australia’s economy is heavily reliant on exporting its natural resources.

“The economy has hit a temporary pothole courtesy of the natural disasters this year,” said Besa Deda of St George Bank.

Ah yes, the weather. I’m sure the global and in particular the Asian slowdown has NOTHING to do with it ;)

Growth figures are being revised down in the US:

A Chicago-area manufacturing gauge dropped by the largest amount in nearly two-and-half years in May, in a further sign that the rise in oil prices and the Japanese earthquake have affected activity.

While that reading is still significantly above the 50-line indicating growth, the eleven-point drop is the biggest one-month deceleration since Oct. 2008 and was worst than the 60% reading that economists polled by MarketWatch anticipated.

Indexes for production, new orders and order backlogs each dropped by double digits. Inventories jumped, which in this case is more likely an indication of unplanned gains due to a lack of sales than stocking up in anticipation of better times ahead.

China reported an unexpected $7.3 billion trade deficit, the biggest in seven years, buttressing the government’s case against U.S. arguments for faster gains in the yuan.

Yuan forwards dropped after today’s release as investors pared bets on the appreciation of China’s currency against the dollar. Premier Wen Jiabao aims to spark domestic demand and reduce the role of exports in the economy through wage increases, rather than the exchange-rate gains sought by the Obama administration.

Faber may have been spot on with his predictions about China crashing within 9-12 months.

This is the development I also expected in terms of what could potentially precede a Yuan crash, which it contrary to what virtually the whole world is expecting right now.

As I said in 2009 already (albeit prematurely, granted)

Everyone is in love with the Chinese story. Everyone has huge expectations of China. Nobody considers the possibility that their politicians might be making the same mistakes ours’ are making.

Such an imbalance between expectations and reality usually ends badly.