Mish recently posted a synopsis of an article about things happening in China:

Clearly a crash is underway. The above stats also show the soft-landing thesis is written on toilet paper.

Clearly a big reset is happening in China.

Michael Pettis is betting on an average GDP growth of 3 percent over the next 10 years. I’m with him on that.

Living in the edge of the Ordos storm , Ordos was beset with a different version of real estate lending Wenzhou panic . For example, local ” Jinxin Han Lin Yuan ” project , its second-hand house prices are around 10,000 yuan, while the market price now only is 3750 yuan.

… it is hard to find a better example of how government spending produces rampant malinvestment. Note that spending on such useless projects is not the only source of “GDP growth” by Chinese measures: Even funds that are only earmarked, not yet spent, are included.

What drives all this madness? It’s simple:

New local-currency loans totaled 294.8 billion yuan ($43.2 billion), compared with 253 billion yuan in October, according to data released by the People’s Bank of China on its Web site today. The median forecast of 19 economists in a Bloomberg News survey was 250 billion yuan.

M2, the broadest measure of money supply, rose a record 29.74 percent in November from a year earlier.

This is why I believe that the wide spread notion Free Floating Yuan = Stronger Yuan is a complete and utter fallacy.

China’s growth is a mirage, its bubble a monstrous one, its impending crash completely inevitable.

The Chinese stock market has staged a remarkable 100% rally from October 2008 through the end of July 2009. August 09, however, hasn’t been good for Chinese stocks. Since August 4th, Chinese stocks have now fallen by more than 20%.

EWI writes China’s Stocks Crash: Is The United States Next?:

In the past three weeks alone, China’s formerly sizzling stock market has gone from bull market leader to bear market letdown. On August 30, the Shanghai Composite Index plummeted 6.7%, its largest one-day drop of 2009 so far. And, of the 89 global markets tracked by Bloomberg, the Shanghai index came in last place.

As for what caused the freefall, mainstream experts point their collective finger at one main factor: Growing fears that China’s monetary officials will turn off their easy-money spigot. Here, this August 31 BusinessWeek stands in:
“Investors began selling on concerns that banks will cut back on lavish lending that had helped push shares up by more than 80% since that start of the year.”
Here’s the thing: the drunken lending habits of China’s banks have been on the global Concern-O-Meter for quite some time now. And last I checked, its needle reading jumped from “Don’t worry be happy” — to — “Be Afraid, Be Very Afraid” many months ago. To wit:
Yet during that time, the mounting anti-lending rhetoric failed to take the wind out of the Shanghai Composite Index’s sails. Prices rallied without resistance to new yearly highs until early August.
So if the “fundamental” shoe doesn’t fit, what’s the real story here? Well, I’ll make it really simple: the Shanghai Composite Index has plunged more than 20% from its 2009 high on August 4. And, in the days leading up to the market’s reversal, China landed on the radar of several of EWI’s subscription-based publications. For our analysts, the time had come to stage a full frontal attack and warn of a major turn in China’s fortunes.
Here, the following catalogue of previous publications fills in the blanks:
August 2009 Elliott Wave Financial Forecast observes the unsustainable nature of China’s latest stock market rise and writes: “China’s debt bubble will succumb.”

August 14 Asian Short Term Update: “All eyes continue to be on China as we ascertain whther or not an intermediate-term-top is in place.“

August 14 Short Term Update: Presented the following close-up of China’s main stock market and wrote: “A break of the trendline will be the next important tip” that a larger decline is underway.

August 14 European Short Term Update: “Though not under our normal purview for ESTU, China has been the central source of liquidity…China’s sharp decline may be a case of the pin meeting the balloon.”

And how about the fundamentals of the oh so vibrant, dynamic, unbreakable, sound, and decoupling economy? Some facts Mish posted today about China’s unsustainable stimulus and property bubble:

A 4-Minute Tour of the China Property Bubble

What is China doing with all that printing? Please take a A 4-Minute Tour of the China Property Bubble to find out.

If you thought Minnesota’s Mall of America was the world’s biggest shopping center, think again. South China Mall is a Vegas-like spectacle built in 2005 that now sits almost entirely empty. In the current economic climate, could this be a symbol of things to come? 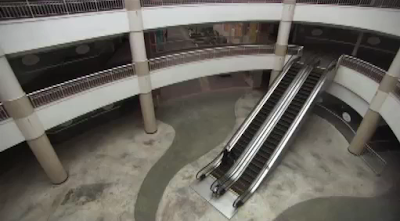 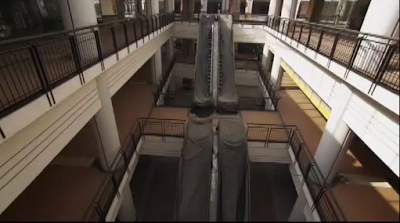 Think about all the concrete, steel, copper, and energy it took to build that mall. This is not an isolated case either as the previous 4-minute video shows.

Let’s not confuse a renewed crack-up boom in China with a sustainable recovery. And let’s not pretend much of this building is anything other than malinvestment.