Signs abound that the global commodities bubble, fueled by money and credit creation on the part of the world’s governments, is coming to a dramatic end.

Long-vacant New Orleans warehouses are bursting with metals such as copper, lead, aluminum and zinc as manufacturing slows down with the economy. The stockpiles that are accumulating are good news for owners of local warehouses, but the trend has touched off a rare scramble for specialized warehouses in certain parts of the metro area.

Kevin Kelly, owner of Port Cargo Service, a metals warehousing business, said it may take years to run down supplies. He says the city is running out of suitable warehouse space.

“We’re probably close to 98 percent occupancy, which is the best ever,” Kelly said. “I’m considering buying property and building warehouses if I can find good land to build it on.”

With industrial demand slowing down so rapidly, and with the Chinese real estate and government credit fueled malinvestment bubbles coming unglued, industrial and agricultural commodities are in for a well deserved carnage.

To be sure, gold is not an industrial commodity. :)

Recently there have been quite a few indications that commodities may be headed south. The recent rise in virtually all soft commodities and non-gold commodities has been fueled by utterly misplaced inflation expectations.

Crude oil will collapse to $20 a barrel this year as the recession takes a deeper toll on fuel demand, according to academic and former U.S. government adviser Philip Verleger.

A crude surplus of 100 million barrels will accumulate by the end of the year, straining global storage capacity and sending prices to a seven-year low, said Verleger, who correctly predicted in 2007 that prices were set to exceed $100. Supply is outpacing demand by about 1 million barrels a day, he said.

“The economic situation is not getting better,” Verleger, 64, a professor at the University of Calgary and head of consultant PKVerleger LLC, said in a telephone interview yesterday. “Global refinery runs are going to be much lower in the fall. If the recession continues and it’s a warm winter, it’s going to be devastating.”

Crude oil last traded at $20 a barrel in February 2002. Futures were at $61.18 today in New York, having recovered 89 percent from a four-year low reached last December. The Organization of Petroleum Exporting Countries is implementing record supply cuts announced last year in response to plunging consumption.

“OPEC don’t realize the magnitude of the cuts they need to make,” which would total about a further 2 million barrels a day, Verleger added. “Storage is going to become tight. It’s not clear if there’s going to be enough storage available.”

Oil will average $63.91 in the fourth quarter, according to the median of analyst forecasts compiled by Bloomberg. Crude for December delivery traded at $65.61 today in New York. Prices have rebounded on expectations of a demand recovery, led by China and other developing economies, and concern expansionary monetary policy would stoke inflation and weaken the dollar.

At the other end of the spectrum from Verleger, Goldman Sachs Group Inc. predicted in a report yesterday oil will rally to $85 a barrel by the end of the year, and recommended that clients buy futures contracts for delivery in December 2011.

“China is in a real desperate situation,” said Verleger, who publishes the Petroleum Economics Monthly. “We’re in a situation where U.S. consumers aren’t consuming and Chinese manufacturers get hurt. Economists are looking for growth in all the wrong places.”

Forward contracts for oil have been higher than prices for immediate delivery this year, a situation known as contango, creating incentives to buy crude now and store it. That may end as growing stockpiles make storage more expensive.

“Prices would be much lower today, but for the very large incentive to build inventories,” Verleger said. “You need forward buyers, which we had when people were fearing inflation, but as concerns turn toward deflation” that will no longer be the case.

I fully agree with Verleger, especially with the last sentence. 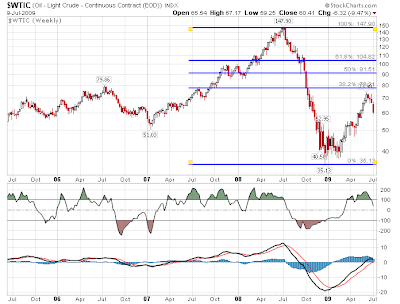 While the rebound looks impressive on a log chart, Fibonacci retrace levels show the real story. Crude oil price did not even muster the strength to get to the 38.2% retrace level.

Moreover, technicals are now pointing down as evidenced by the moving average convergence/divergence (MACD) and and commodity channel index (CCI) in the above chart. A pullback to $50 or even $40 is certainly not out of the equation. And if that happens, expect to see media concerns over deflation.

The truth is the rebound in oil prices proved nothing in regards to the inflation/deflation debate, nor will a retest of the December lows prove anything should it happen.

Inflation is a monetary event not a price event. And even if inflation was regarded as a price event Speculation In China Does Not Constitute Inflation In The US.

Oil is subject to peak oil concerns, increasing demand from China, and speculative pressures. As such, in isolation, the price of oil is a poor measure for inflation regardless of what ones view of inflation and deflation is.

For traders, the technicals and the fundamentals both look weak.

Green shoots are withering on the vine, fuel supplies are rising, Crude oil supply far outstrips motorist demand, tankers at sea act as floating storage, and the technicals look awful. For now, that is what matters. Peak oil be damned.

And last but not least, the recent EWI newsletter had the following to say on sugar:

If I had a nickel for every time I heard the mainstream experts say that sugar prices are attached to crude oil’s hip, I wouldn’t just have a sizable nest Egg. I’d have the whole darn chicken.
Here, the following news items exemplify the point:
PROBLEM: As the final piece of data reports — sugar prices hit their recent high on June 30, three weeks AFTER the rally in crude reversed. During that time, oil prices were getting clobbered, while sugar soared to its loftiest level in three years.
(The Next Focus of FreeWeek: Sugar The July 16 Daily Futures Junctures includes five labeled price charts, detailed insight, and live, video analysis on the near-term trend emerging in sugar. See the complete story at absolutely no cost.)
As for an alternative view, the July 16 Daily Futures Junctures stands alone. In that publication, Elliott Wave International’s chief commodity analyst Jeffrey Kennedypresents five labeled price charts showing exactly what’s behind the strong run-up in sugar: A Double Zigzag. This pattern occurs whenever a single zigzag (simple a-b-c shape in which the top of wave b is noticeably lower than the start of wave a) falls short of a normal target and must be repeated in sequence.
To see the “double z” in real-time, check out the second of Jeffrey’s sugar snapshots below:

As Jeffrey illustrates on the chart, the most common relationship for double zigzags is that of “Equality.” Meaning: The second zigzag travels the same distance as the first. In the case of Sugar, this scenario has been fulfilled, indicating the start of a turn DOWN.
But, as Jeffrey likes to say: “A wave count is only a wave count until it is confirmed by price action.” He then reveals exactly what sugar price must do to confirm his bearish labeling.

There are two commodities I feel good about, gold and maybe silver. Other than that, I recommend that commodity bulls be cautious, they might lose their shirts by betting on inflation, full steam in the wrong direction.