In a sovereign floating fiat money system, in particular under balanced trade or a trade deficit, government deficits are the only way the private sector can accumulate net private saving. As I’ve argued before, historical evidence shows us that there is a link between recessions and insufficient net private saving.

The 7th time the US government ran a budget surplus was of course in the lead up to the 2001 crash and ensuing recession, and you could argue that it all ultimately culminated in the so called Great Recession of 2008-2009.

The most instructive point in this discussion, in my opinion, is where Krugman flat out exposes his ignorance about the essence of the concept of fiat money:

Ron Paul: “People today, if they use gold and silver, you can go to jail.”
Paul Krugman (chuckles): “That’s not what I’ve … that’s not MY understanding of the law.”

Well, then it might behoove him to be a bit more open and curious about cases like that of Bernard von NotHaus:

Bernard von NotHaus, 67, was convicted today by a federal jury of making, possessing, and selling his own coins, announced Anne M. Tompkins, U.S. Attorney for the Western District of North Carolina. Following an eight-day trial and less than two hours of deliberation, von NotHaus, the founder and monetary architect of a currency known as the Liberty Dollar, was found guilty by a jury in Statesville, North Carolina, of making coins resembling and similar to United States coins; of issuing, passing, selling, and possessing Liberty Dollar coins; of issuing and passing Liberty Dollar coins intended for use as current money; and of conspiracy against the United States.

I can can already guess what Krugman is going to proclaim in his defense: That of course he’s well aware of the case and that said individual was only sent to jail because he was ripping of the “Dollar” brand or that he was committing acts of conspiracy or something along those lines.

At 6:23 Ron Paul talks about the policies that laid the foundation for an end to the Depression and the post WW2 era boom which Krugman himself admits he wants to go back to:

“… we cut spending by some 60 percent, we slashed taxes, finally the Depression ended. It was the liquidation of debt that made it available that we could go back to work again.”

Here are some charts for the period in question:

It is, then, a pretty arrogant, self centered, narcissistic, and most importantly false way of debating when all you can respond to someone confronting you with such historical facts is “That’s not my version of history”.

Tenured economics professors are unfortunately a so tied up with internal he-said-she-said gossip and with debating the inconsequentialities of whether the target inflation should be 2 or 3 percent and whether rich should be taxed more or less, that they really seem to have no time to delve into a comprehensive, detailed, and honest analysis of historical and economic facts.

It is thus up to you, dear reader, to tune out when you hear such clowns spout out irresponsible, boring, and oft-repeated and refuted nonsense, and to seek out those who take the pursuit of truth more serious than childish ad-hominem attacks, gossip, and prestige amongst the influential and well connected.

My 2 cents about the following statement from a NYT article:

But no matter how morally satisfying austerity may be, it’s the wrong answer. Hoover’s austere instincts worsened the Depression. Roosevelt’s postelection reversal helped, but he also prolonged the Depression by raising taxes and cutting spending in 1937. Only the giant stimulus program known as World War II finally ended the Depression. When the private sector is hesitant to spend, the government has to — or no one will.

Here are my comments about Hoover’s austerity and wars as stimulus:

By the way, WWII killed about 500,000 Americans, about 700,000 were injured, many of them for the rest of their lives. That’s a total of around 1.2 million Americans, around 1% of the entire population either decimated or maimed.

I wonder how those people and their loved ones feel the above mentioned author’s “stimulus program” has stimulated their lives?

Also, the WWII years in general were not boom years for the average American at all! They were years of compulsory rationing, government crackdowns, price fixing, 90% taxes, etc.

What did happen was that after the war the federal US government reduced its involvement by two thirds, lifted burdens upon its citizens, and allowed for a dynamic and vibrant market to spring up once more, precipitating what is commonly known as the post war boom with a constantly declining poverty rate until the Great Society programs put an end to that as well.

I found a neat site for data about US Government spending. I have posted spending charts before, but never really found data that goes this far back.

This is a chart I generated from data that I pulled from that site:

Please, people! Check your facts before you go on the record with such foolish nonsense!

I understand that facts can be annoying when they contradict the tripe you’ve been indoctrinated with from childhood on. But I would strongly and passionately urge you to get off this delusion, to sincerely pursue the facts out there. The stakes are way too high to take this stuff lightly …

As I already pointed out many times, there are a lot of parallels between the current depression and the one from 1929.

Some interesting charts Hussman posted on his blog today compare the current bear market rally with the biggest one from the Great Depression:

Here is a chart of the S&P 500 in weekly data. Note that the market easily and repeatedly breached the lower green bands during the decline, so we should not assume that these bands provide reliable guidance for buying or selling. The recent advance has moved the market the full distance from lower to upper bands, however, which typically does not go uncorrected. 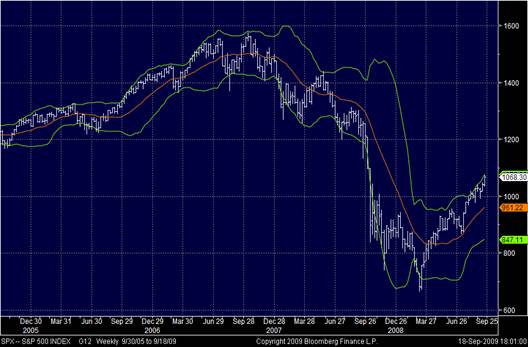 The following chart may look the same as the above chart. But it is from April 1930. 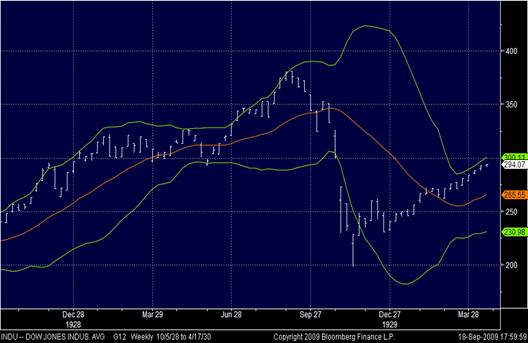 The market recovered by an almost identical percentage following the 1929 crash, peaking in April 1930, after which it suffered a subsequent decline to fresh lows. The point here is not that the same outcome will necessarily follow in this instance, but that we would be remiss not to consider the fact that investors were equally cheerful in early 1930, when the front page of the Wall Street Journal featured an article entitled “A Turn of the Tide Near” assuring investors: “It cannot be imagined that the wholesale failures and interest defaults characteristic of earlier depressions will now be repeated. Confidence in our banking system wholly precludes the money panics of former eras.” 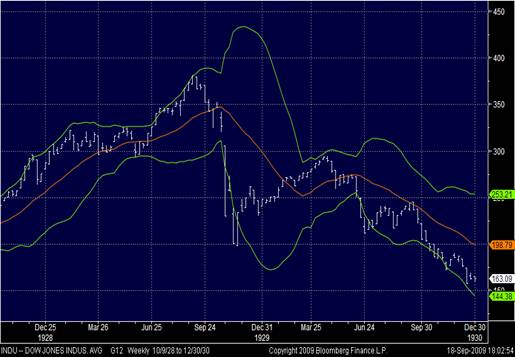 Hussman observes the parallels in the index movement from lower to upper bands, and suggests that the current market might be headed in the same direction. I would recommend to at least seriously consider this possibility in all your decisions.

The key thing to keep in mind in all of this: The recent rally, green shoots, and recovery hopes have been created and/or fueled by massive government expenses, and by a believe in the omnipotence of our leaders in Washington.

But government spending sprees, too, will have to come to an end sooner or later. On top of that, all that the recent government programs have accomplished is to get marginal individuals back to the same flawed habits, such as owning unaffordable homes, buying too many cars, etc.

The interest that the government has to pay on its debts when it runs up sky high deficits, and the taxes it will have to raise in order to make those payments, will be hanging over the recovery like a Damocles Sword. The Federal Reserve, too, will be faced with a similar situation. Let’s assume, for the sake of the argument, that lending activity on homes, cars, etc. were to pick up again. What will the Fed do then? Cut interest rates? Add more bank reserves? Surely not, quite the opposite.