Some of the slides and statements that caught my attention on T2 Partners’ Overview Of  The Housing/Credit Crisis And Why There Is More Pain To Come:

Recent Signs of Stabilization Are Likely the Mother of All Head Fakes:

Rather than representing a true bottom, recent signs of stabilization are likely due to two short-term factors:

1. Home sales and prices are seasonally strong in April, May and June due to tax refunds and the spring selling season

2. A temporary reduction in the inventory of foreclosed homes

– Shortly after Obama was elected, his administration promised a new, more robust plan to stem the wave of foreclosures so the GSEs and many other lenders imposed a foreclosure moratorium

– Early this year, the Obama administration unveiled its plan, the Homeowner Affordability and Stabilization Plan, which is a step in the right direction – but even if it is hugely successful, we estimate that it might only save 20% of homeowners who would otherwise lose their homes

–This is necessary to work our way through the aftermath of the bubble, but will lead to a surge of housing inventory later this year, which will further pressure home prices

$2.5 Trillion Alt-A Mortgage Resets Are Only Still Ahead of Us: 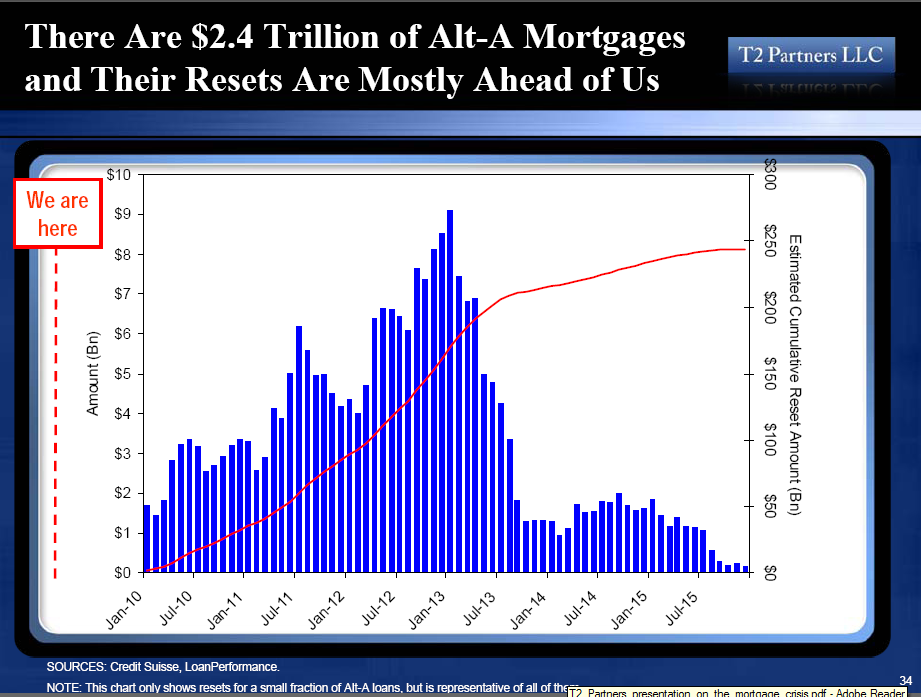 Click on image to enlarge.
…but after they reach the trendline, what keeps them from falling deeper? Markets always overshoot in both directions.

California housing – at the low end – is ‘bottoming’ mostly because: a) median prices are down 55% from their peak over the past two years, thereby making the low end affordable; b) foreclosures have temporarily been cut by 66% through moratoriums reducing supply; and c) demand is picking up going into the busy season.

But the moratoriums are ending and the number of foreclosures in the pipeline is massive – they will start showing themselves as REO over the near to mid-term. The Obama plan held the foreclosure wave back, creating a huge backlog and now the servicers are testing hundreds of thousands of defaults against the new loss mitigation initiatives. We presently see the Notice of Defaults at record highs and Notice of Trustee Sales back up to nine-month highs – there is no reason for a loan to go to the Notice of Trustee Sale stage if indeed it wasn’t a foreclosure. However, the new ‘batch’ are not only from the low end but a wide mix all the way up to several million dollars in present value.

Because the majority of buyers are in ultra low and low-mid prices ranges, the supply- demand imbalance from foreclosures and organic supply will crush the mid-to-upper priced properties in 2009. We already have early seasonal hard data proving this. As the mid-to-upper end go through their respective implosions this year and the volume of sales in these bands increase as prices tumble, the mix shift will raise median and average house prices creating the ultimate in false bottoms. We also have data proving this phenomenon.
After a year or so the real pain will occur when the mid to upper bands are down 40% from where they are now, and the price compression has made the low to low-mid bands much less attractive – the very same bands that are so hot right now. Rents are tumbling and those that bought these properties for investment will be at risk of default (investors have been buying all the way down). Investors have just started to get taken to the woodshed from all of the supply and this will get much worse. Mid-to- upper end rental supply is also flooding on the market making it much better to rent a beautiful million dollar house than putting $300,000 down and buying.

After investors are punished — and with move-up buyers gone for years – it will leave first-time homeowners to fix the housing market on their own. Good luck and good night. Five years from now when things look to be stabilizing, all of these terrible kick-the-can-down-the-road modifications that leave borrowers in 5-year-teaser, ultra-high-leverage, 150% LTV, balloon loans will start adjusting upward and it will be Mortgage Implosion 2.0. These loan mods will turn millions of homeowners into over-levered, underwater, renters and ensure housing is a dead asset class for years to come.

Due to a confluence of events including a national foreclosure moratorium and near-zero sales in the mid to upper end during the off season, the broader housing data show signs of stabilization. Taken in context, it is a blip. There are no silver linings or green shoots in housing whatsoever other than by these first-time homeowners – former renters – who now find it cheaper to own than rent. This is a very good thing, but it only applies to a small segment of the population and will not be able to support the market. In addition, the first-time buyers who come out of the rental market put continuous pressure on rents.

Our data shows that the mid-to-upper end housing market is on the precipice of the exact cliff that the market fell off of in 2007, led by new loan defaults. What happens to the economy when you hit the mid- to-upper end earners the same way the low-to-mid end was hit with the subprime implosion? We will find out soon enough. When we look back on housing at the end of 2009, anyone that made positive housing predictions this year will not believe how far off they were.

…as I already noted in March, there is a Major Collapse in High End Properties Underway.