Looming foreclosures are hanging over the US housing market like a Damocles Sword, in particular those that arise from interest only loans:

Edward and Maria Moller are worried about losing their house – not now, but in 2013.

That is when the suburban San Diego schoolteachers will see their mortgage payments jump, most likely beyond their ability to pay.

Like millions of buyers during the boom, the Mollers leveraged their way into a house they could not otherwise afford by taking out a loan that required them to make only interest payments at first, putting off payments on the principal for several years.

It was a “buy now, pay later” strategy on a grand scale, meant for a market where home prices went only up, and now the bill is starting to come due.

With many of these homes under water — worth less than the loans against them — many interest-only mortgages will soon become unaffordable, as the homeowners have to actually start paying principal. Monthly payments can jump by as much as 75 percent.

The Mollers owe so much more than their house is worth, and have so few options, that they are already anticipating doom.

Keith Gumbinger, an analyst with HSH Associates, said: “This is going to be the source of tomorrow’s troubles. The borrowers might have thought these were safe loans, but it turns out they bet the house.”

After three brutal years, evidence is growing that the housing market has turned a corner. Sales in July were the highest in a year, and August gives signs of having been even better. In nearly all major cities, home prices are now rising.

Celebration, however, might be premature. The plight of the Mollers and many others in a similar position is likely to weigh on any possible recovery for years to come.

Experts predict a steady drumbeat of defaults over much of the next decade as these interest-only loans mature. Auctioned off at low prices, those foreclosed houses could help brake any revival in home prices.

Interest-only loans are not the only type of exotic mortgage hanging over the housing market. Another big problem is homeowners with “pay option” loans; in many of these loans, principal balances are actually increasing over time.

The article goes on to say that about 18% of prime interest only loans are already 60 days or longer delinquent. It is safe to assume that those will almost all be foreclosed upon when payments reset, no matter how much people pray for another boom. But on top of that, what about other interest only loans and ARMs.

You might want to look intosomething I recently referenced regarding this:

$2.5 Trillion Alt-A Mortgage Resets Are Only Still Ahead of Us: 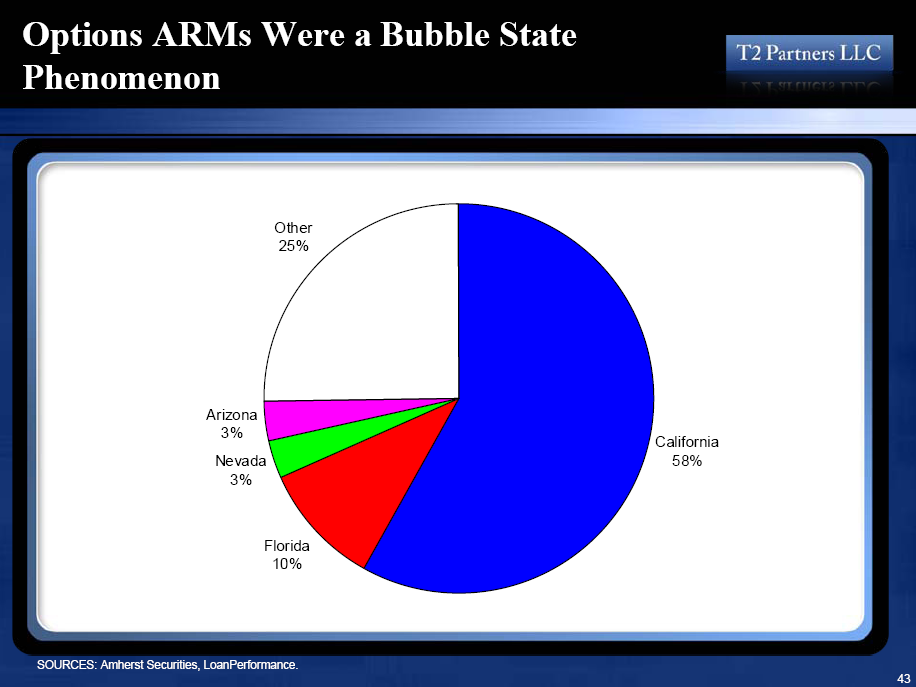 Delinquencies and Foreclosures by State

Calculated Risk has an excellent chart showing state by state totals in his post MBA Forecasts Foreclosures to Peak at End of 2010.

Annotations in hot pink are mine. 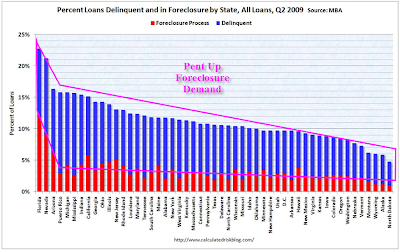 The area in pink represents potential foreclosure demand. Not all of that area will be foreclosed, but some of it sure will. The “Hidden Backlog” mentioned above (and highlighted in red) is within that pink area.

Make no mistake, there won’t be another housing boom anytime soon, most likely not even  in our lifetime. Those sky high housing prices of the 2000s are not coming back. Every decision you make based upon this false hope, will be but a false one.