The true money supply in March has grown slightly to $2,202 billion in March:

The annual growth rate has, however, dropped to 3.85% now:

For a little while the Treasury has been winding down its mysterious supplementary financing program.

Now, after Congress has, as always, made way for more public debt by raising the ceiling, the program is being revived:

The Treasury Department announced Tuesday that it is expanding its Supplementary Financing Program to help the Federal Reserve manage its enormous balance sheet. In a statement, Treasury said it will boost the SFA to $200 billion from its current level of $5 billion. The fund had been up to $200 billion but was scaled back when Congress delayed passage of an increase in the debt limit. Now that an expansion of the debt limit has been signed into law, the department is able to resume the program. Starting on Wednesday, Treasury will conduct the first of eight weekly $25 billion 56-day SFP bills to restore the program. The department said it will then roll the bills over. “We are committed to work with the Fed to ensure they have the flexibility to manage their balance sheet,” a Treasury official said.

I’m not sure if this really means anything to anybody. Maybe I am just not getting something here. But I would love for somebody from the Treasury or the Fed to explain to me what precisely they mean by working “with the Fed to ensure they have the flexibility to manage their balance sheet”.

Obviously something shady is going on here when they have to use such complicated constructs and fuzzy terminology.

What has been most noteworthy recently was the following development in the supply of credit and loans during the last week or March: The last time such a severe spike occurred was in October of 2008, to no avail as credit relapsed afterwards along with a severe market crash … a pattern which is only too likely to repeat itself at this point.

Update: I just chatted with Mish about this and he told me that this recent spike is likely to be just a technicality that is due to some reclassification of some student loan.

The annual growth rate has again leveled off to now 5.5%.

The annual growth rate has now slowed down to 3.2%:

A sustained drop below 3% is most of the time a good recession indicator. Given that we are still in a recession which may be declared over soon, this may be just another indicator of the coming double dip recession, as I have outlined a few days ago.

The growth rate of the true money supply has slowed down to 6.68 percent in November 2009.

Below is the actual amount of money in circulation over the past months till now:

Below please find a charge of the true money supply growth rates since 1930:

The red areas indicate recessions. As I have mentioned before the growth rate of the true money supply tends to be a relatively reliable indicator of coming recessions whenever it drops below 3 percent.

Note the area between 1930 and 1940: The Great Depression, an obvious result of the government’s previous inflation and credit expansion policies and the ensuing business cycle, was accompanied by a decline in the money supply. In 1933 the true money supply spiked up through 1936 only to contract again in the recession of 1937/38. The pattern that is currently panning out may very well be following that one in one way or another. It is certainly likely that soon an official end to the recession will be declared. Another one is likely to follow quickly, attempting to correct all the malinvestments that will have been created or left uncorrected by the recent and ongoing bailout and stimulus policies.

The government’s response to that coming recession is of course predictable. What exactly it will lead to no one knows, except that it won’t be good at all. The recession of 1938 was closely followed by World War II … 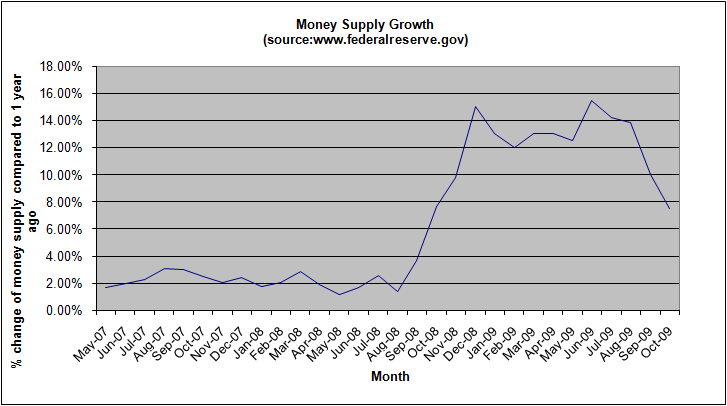