I recently started a recorded learning series where I read out and comment on some of the concepts that I work with here. This is the first part, titled “The Scope of Economics”:

I recently spent some time integrating different concepts I read about into one coherent framework.

In particular I borrowed from Stefan Molyneux’ Universally Preferable Behavior and from Mises’ Human Action. The flowchart below is the result.

It enables you to (at least that’s the idea) categorize any theory someone proposes about Human Action into a proper sub-category. 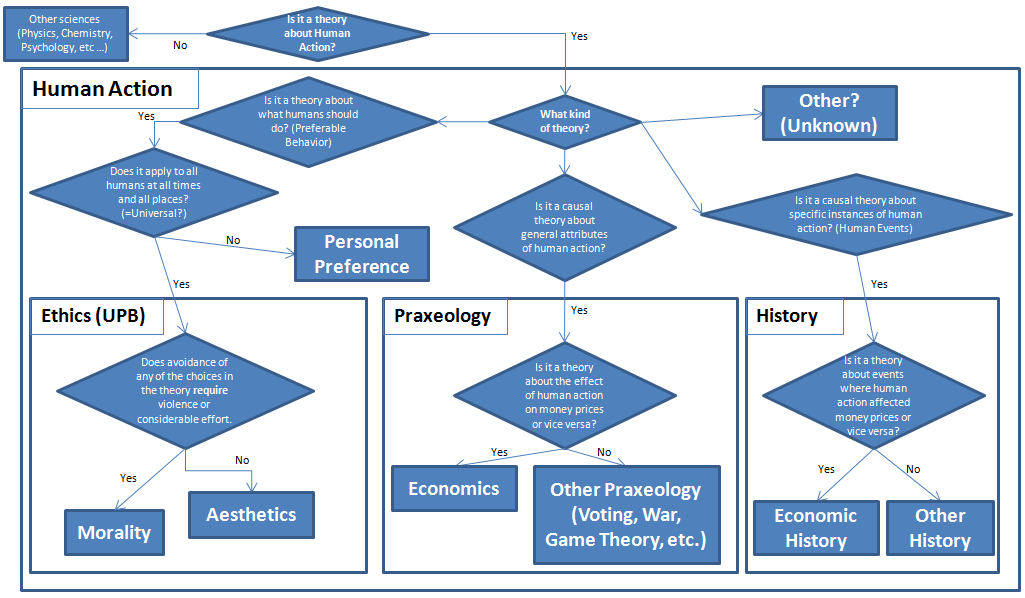 Examples of Theories About Human Action

As with any other science, the criterion for determining the truth or falsehood of a theory about Human Action, is logical validation and empirical accuracy.

One issue that seems to worry people is that of gray areas. Most people are worried that if we allow for gray areas in the field of Ethics, it ceases to be a science. Others say that since there are gray areas in Ethics it doesn’t qualify as a science. Such assertions make little sense.

First of all, science is a process, not an absolute immutable law. It is the ongoing process of pursuing knowledge. It is true that the objective of science is the examination of truth versus falsehood in every field of human knowledge. But that doesn’t mean that there are no gray areas. There are certainly things that can without a doubt be confirmed as true or dismissed as false. Simple mathematical theories come to mind, for example. Then there are cases where the line becomes more blurred.

For example, biology teaches us that a bird has two wings, but once every so often a bird with one wing is born. Does this mean we are absolutely incapable of classifying the creature as a bird? Furthermore, does it completely detonate the science of biology?

Of course it doesn’t. It is thus the same way with Ethics. For example, sometimes the line between Aesthetics and Morality becomes blurry. To what extent can something be considered “considerable effort”?

Is it considerable effort if I’m a 3rd grader and I have to avoid walking by the 4th graders’ lockers because sometimes there is a bully who (rather pathetically) punches my shoulder? Maybe, but probably not as much as, say, having to move to another country. Is the bully’s action immensely evil? Probably not, at least not as evil as, say, waging a genocidal war that murders and/or dislocates millions of innocents.

Thus such gray areas actually help us explain why we condemn certain acts as enormous evils, while others can be considered minor evils, or even borderline aesthetically negative, rather than plain immoral.

Then there are those who like to put us to the test by confronting us with incredibly ridiculous horror scenarios or lifeboat situations which are supposed to invalidate the concept of objective Ethics: “What if a creature from another planet were to destroy the planet unless I raped a 29 year old prostitute using a condom? Surely THEN rape is moral, huh, huh??”

Such scenarios are not even remote arguments against the conceptual validity of Universally Preferable Behavior. Whether a space alien asks me to rape another person to save the world or not, it remains a true statement that rape cannot be universally preferable because the statement creates a logical contradiction. This would be akin to saying “Would you agree with the Grand Xenu that 1+1=3 if he threatened to destroy the whole world otherwise?” Heck, sure I would … does that mean that the theory 1+1 = 3 is true ??

Conformity with theories about Universally Preferable Behavior is optional. People are free to believe in false theories and act upon them. This doesn’t make the truth or falsehood of the theories ambiguous.

That having been said, I would like to encourage people to focus on solving the obvious problems we are facing in today’s world. Human Action, and Ethics in particular, is a science that is of course ultimately supposed to help us all live better and more peaceful lives. It is a science about rationally choosing and acting humans (where rational does NOT mean flawless, but rather non-instinctive action).

It is not a science about an imaginary society where all food has run out, all water is gone, all means of production have ceased functioning, all land has disappeared, and everyone is trapped in a giant ship that is sinking with only 3 lifeboats left to occupy. In such a world, human action ceases to exist and gives way to the instinctive and immediate whims of starving brutes fighting for survival. The relevance of Human Action and Ethics shrinks into irrelevant nothingness.

A medical doctor, well versed in the sciences of medicine and human biology, would be at a loss when tasked with saving an individual who suffers from tuberculosis, cancer, broken arms, and chopped off legs while having a heart attack and a brain aneurysm after having been hit by a train. Does this detonate the science of medicine?

The conceptual existence of gray areas and the conjuring up of lifeboat scenarios don’t make a dent in the concept of objective Ethics as defined by us here.

Some people assert that a shortcoming of praxeology is that it denies the relevance of empirical evidence. This assertion suffers from a misunderstanding of the purpose and scope of praxeology.

It is true that praxeology is fundamentally axiomatic, meaning it builds all its theories upon the irrefutable axiom that humans consciously aim at chosen objectives and employ chosen means in order to attain those objectives.

But that axiom in itself is of course empirical. It is derived from a simple observation of human action. It is, like any other proposition, derived from objective facts of observable reality. Someone must at some point have made that observation in order to formulate the axiom.

Just as logic is nothing but a derivative of the consistency of all reality, praxeology in particular is a derivative of the occurrence of human choice and action in reality. If reality wasn’t consistent, there would be no logic. If no purposefully acting and choosing beings existed in the universe, then praxeology would not exist.

What praxeology does say is that at the very least any proposition about human action naturally needs to be in complicance with irrefutable axioms about human action in order for it to be potentially valid. Praxeology has never claimed to be helpful in the process of gathering evidence for the actual occurence of an event. This is, in fact, the task of history and outside the scope of praxeology.

Nor is praxeology itself stubborn toward the evidence of history. If someone were to make a complete and isolated historical observation that contradicts praxeologically established concepts, then he is free to disprove the validity of the praxeological concept on logical grounds. But if he cannot do that, then there is something he is missing in his observation; maybe a variable or two, maybe the measurement was off, maybe his eyesight is skewed etc.

In the same way, if someone were to make an empirical mathematical observation, claiming that he put two red balls and two blue balls into a box, and then suddenly had 5 balls, would you be convinced that the mathematical concept of 2+2 = 4 is invalid? Isn’t it rather possible that there was already a 5th ball in the box, or that someone threw it in from somewhere else, or that the observer had a martini too many? And furthermore, if all these things are not the case, then all we would need is for the person to provide logically deductive proof that 2 + 2 = 4 is a false statement.

Mises was most definitely not ignorant to the evidence of history. I would even go so far as to saying that he is one of the greatest historians of the 20th century. He himself actually subdivided the science of Human Action into praxeology and (you guessed it) … history!

The purpose of history is the gathering of convincing and sufficient evidence to prove that certain events did in fact occur.

History says “The price of house X fell from 2007 through 2010.” while praxeology (or economics in particular) says “Ceteris paribus, the price of a good with rising supply and falling demand will fall.”

History is a helpful tool in finding evidence that further corroborates propositions that already conform with praxeological axioms. Historical evidence in support of any proposition regarding human action is necessary, not sufficient. History without praxeology would be nothing but the observation of seemingly random limb movements of fleshy/bony objects in space.

As it is with history, more than in any other science, social events are always immensely complex, unisolated, and almost impossible to reproduce without introducing new variables. Historical statistics and data can very easily be prepared and falsified to support one view or another.

Thus what Mises rejected was the method of historicism, that is solely gathering historical evidence in order to prove theorems that don’t even pass the very first hurdles of praxeology.