Gold has made it back into the safe 900s and Silver is attempting another run toward $15. 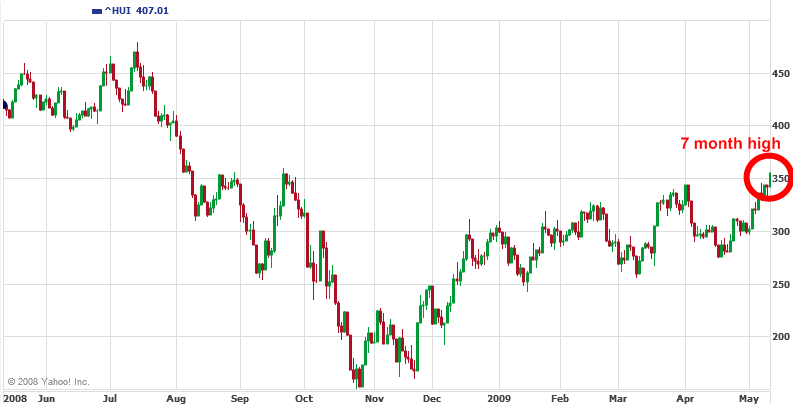 To look at an example of how well silver mining stocks have done since silver bottomed out, please see below the chart of Silver Wheaton Corp (SLW), a Canadian silver miner:

The stock has tripled over the past 5 months.

The relatively low trading volume coupled with good performance is a likely indicator for smart money buying in.

From the beginning of my contributions here at The Fool, I have expressed my conviction that silver offers far more upside potential than even gold for Fools seeking precious metals exposure. By no means do I advocate targeting exclusively silver in place of gold, but I maintain that silver makes the perfect complement to gold exposure, and ought not be overlooked.

See this 2-year chart comparing the relative performance of gold vs. silver, expressed via the proxy ETFs for convenience:

Now, at the worst levels of this precious metals correction (which is now over in every major world currency except the USD), the gold:silver ratio surpassed the 80 mark, which signalled to me that the time was right to be heavily weighted in silver. I created the ‘silverminer‘ CAPS profile on 11/19/08, and the result has been fairly positive so far, but I mention this only to highlight the trend in play. You see, even at today’s ratio of 70 following silver’s recovery from $9 to over $13, I believe silver still has plenty of room to run to normalize this at least towards the 50 level for starters. Later in this precious metals bull market, I expect the ratio to approach 20:1. That would mean silver at $45 today at present gold prices, but I believe that ratio will be reached when gld is sugnificantly higher than where we are today.

If silver reaches the 20:1 ratio near my extremely conservative gold price target of $1,650, that would give us $82 silver. With long-term expectations like these, now you see why I remain so heavily allocated in precious metals.

Coming back to the near-term, though, I avoid speaking to the very near-term because absolutely anything is possible within a short timeframe when entire markets are manipulated to the degree that these markets are. That being said, the manipulation efforts must ultimately fail, and I expect gold to move very bullishly past last year’s high and up toward $1,250 in a way that will surprise even many gold bulls. We could see some weakness before that occurs as last-ditch efforts to contain the price are executed, but I believe such an effect can not last long. At $1,250 gold, a 37% rise from today’s price, I expect silver to trade well into the mid $20s, for a gain of more than 90%. This would of course correspond to a simultaneous drop in the gold:silver ratio to around 50:1.

See this long-term chart of historical gold:silver ratios charted alongside the silver price chartfor a reference. A target ratio of near 20:1 is my rationale for having heavy exposure to silver for the long haul, but I believe even Fools with a shorter time horizon can consider riding the mid-term trend from the current 70:1 ratio to about 50:1. I see a big year ahead for silver once gold breaks out in USD terms the way it has already in the other currencies.

I have said elsewhere that most ratios mean little in this chaotic environment, but the gold:silver ration will always be an important one for precious metal investors to follow, because ultimately these metals are called precious for a reason. Within the Earth’s composition, it is estimated that gold and silver exist in a ratio of 16:1. Food for thought, if indeed markets always seek out true value over time.

I fully concur. I said back in December that Silver had bottomed for pretty much the same reasons:

With the money supply on the rise again, and the Federal Reserve policy obviously out of control, coupled with a very cheap ratio in terms of gold, it is certainly reasonable to start being bullish on silver again. Silver is, after gold, the best monetary metal. True, it derives a lot of its demand from industrial uses, but it has already taken its beating for it.

As far as my limited chart reading skills go, the SLV chart seems to reaffirm this belief:

Has a floor formed? I do think so. Has the trendline been broken? Not quite yet, but it looks like we’re close to a trend reversal.

Silver investments have paid off handsomely since then. The ETF SLV went up by over 40% to now $14.30 and the silver stock Silver Wheaton (SLW) has more than doubled. During the same time the Dow Jones has dropped by about 22%.