The latest flow of funds report was released today by the Fed (values are in $billions): 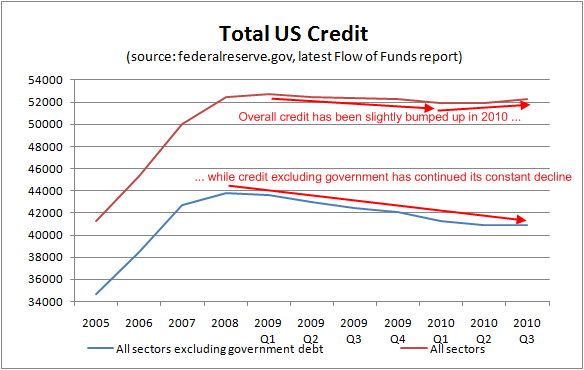 As we can see, the overall credit contraction has taken a break through 2010, at least on the books. This has been due to noticeable credit expansion on the governmental level which will not be sustainable.

Meanwhile, private credit has continued its ongoing uninterrupted contraction even in 2010.

The true money supply in March has grown slightly to $2,202 billion in March:

The annual growth rate has, however, dropped to 3.85% now: 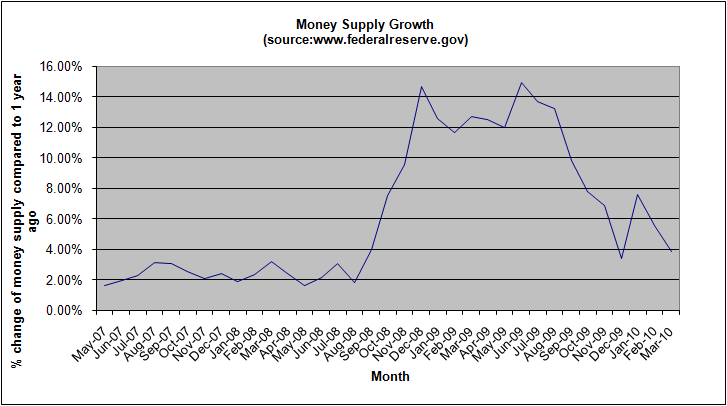 For a little while the Treasury has been winding down its mysterious supplementary financing program.

Now, after Congress has, as always, made way for more public debt by raising the ceiling, the program is being revived:

The Treasury Department announced Tuesday that it is expanding its Supplementary Financing Program to help the Federal Reserve manage its enormous balance sheet. In a statement, Treasury said it will boost the SFA to $200 billion from its current level of $5 billion. The fund had been up to $200 billion but was scaled back when Congress delayed passage of an increase in the debt limit. Now that an expansion of the debt limit has been signed into law, the department is able to resume the program. Starting on Wednesday, Treasury will conduct the first of eight weekly $25 billion 56-day SFP bills to restore the program. The department said it will then roll the bills over. “We are committed to work with the Fed to ensure they have the flexibility to manage their balance sheet,” a Treasury official said.

I’m not sure if this really means anything to anybody. Maybe I am just not getting something here. But I would love for somebody from the Treasury or the Fed to explain to me what precisely they mean by working “with the Fed to ensure they have the flexibility to manage their balance sheet”.

Obviously something shady is going on here when they have to use such complicated constructs and fuzzy terminology.

What has been most noteworthy recently was the following development in the supply of credit and loans during the last week or March: The last time such a severe spike occurred was in October of 2008, to no avail as credit relapsed afterwards along with a severe market crash … a pattern which is only too likely to repeat itself at this point.

Update: I just chatted with Mish about this and he told me that this recent spike is likely to be just a technicality that is due to some reclassification of some student loan. 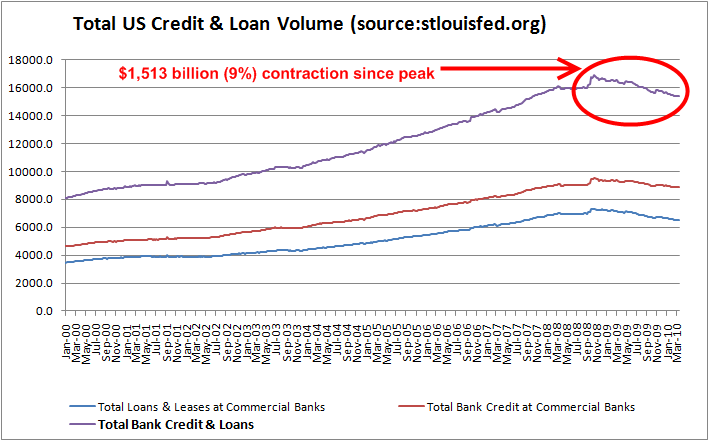 Total private US credit and loans have fallen to $15,374 billion, a total contraction since the peak of now $1,513 billion or 9% of the total volume at the peak in October 2008.

Deflation still seems to be in full swing …

New data is in for the final weeks of February 2010: 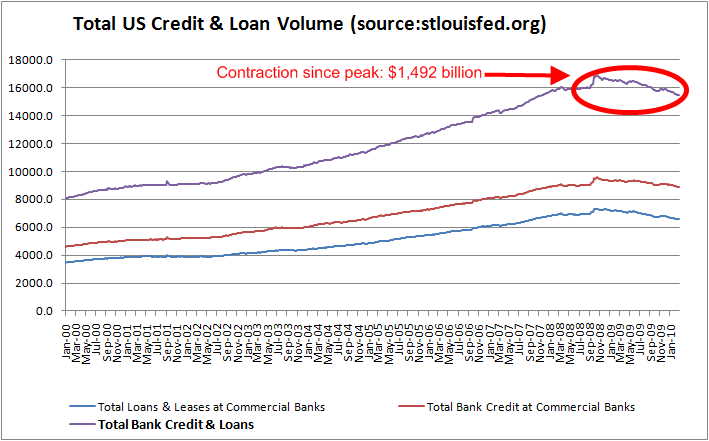 The annual rate of decline is now at 6.7% 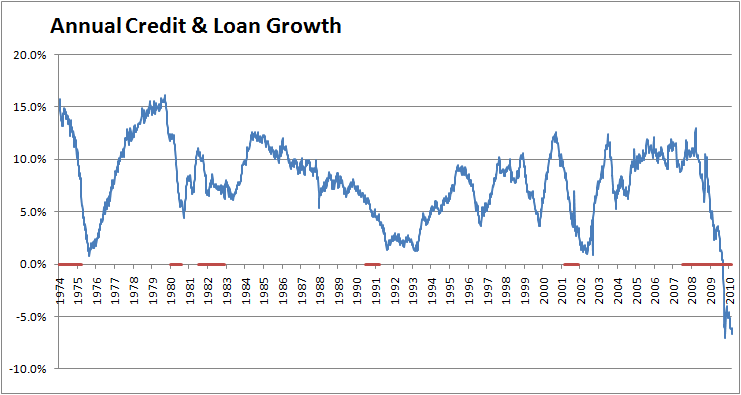 I want to follow up on something Marc Faber said the other day in the second clip.

He said that it is true that private credit is contracting, but it is being offset by a government credit expansion.

I regularly publish the total contraction of total private loans and credit: 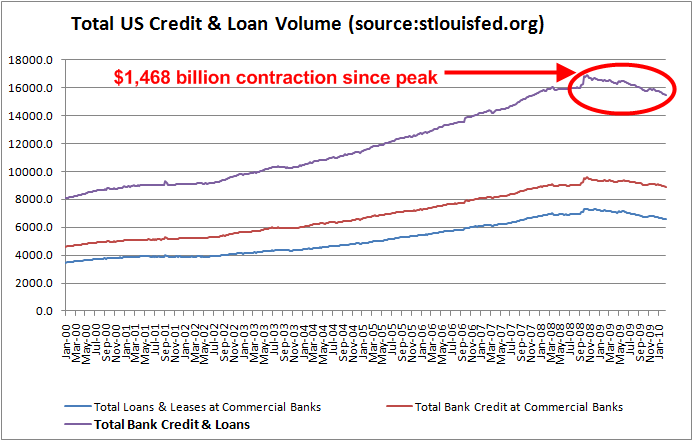 This is, however, only a subset of the total credit picture. What is missing are things like corporate and government bonds, and probably some other non financial obligations.

The most comprehensive data on the total of pretty much ALL credit issued in the US is really the Federal Reserve’s Flow of Funds Report, in particular the subsection “Level tables”.

The current flow of funds report can always be accessed here and for March 11, the latest release shows us the following: 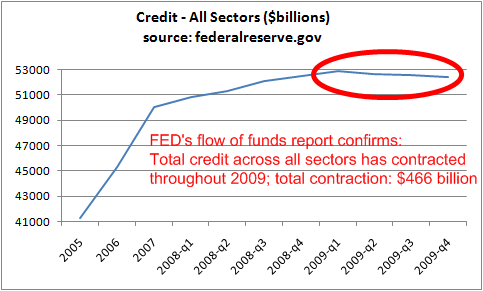 Based on these numbers we can see that total credit, when measured across all sectors, has indeed been declining throughout 2009, by roughly $466 billion, in spite of a massive ramp up in public debt.

This simply shows us the magnitude of the deflationary forces in action.

I would also add to this that we could easily double the total credit outstanding above if we included the federal government’s Medicare and Social Security obligations which nominally amount up to $43 trillion and will never be fully paid back. There is no official number to track for this since these obligations are not reported on any balance sheet and are not traded on any markets. Thus we can only assume that their present value is declining by at least the current rate of decline in the remaining credit volume (about 0.8% through 2009).

This would bring the total contraction in credit up to around $810 billion through 2009.

I’m also not sure to what extent other municipal and state pensions are covered in the flow of funds number, but I rather doubt they are included at all. A lot of those lavish union pension plans are going to have to cut back on their commitments soon, probably the next big events to shake the markets, along with commercial real estate defaults and property values declining.

And last but not least, it is rather unlikely that the current numbers are all marked to market. Government regulations across the board have ensured that banks and corporations can be rather creative in their reporting.

Either way, all this is a rather strong indication that Marc Faber’s assertion may not me correct.