I have been consistently bullish on US Treasurys.

PIMCO now says that betting against US debt was a mistake:

Showing a more bearish view on the U.S. economy, Gross said PIMCO had initially dumped all of its U.S. debt holdings in March as he expected economic growth to be higher, resulting in inflation down the road.

That decision greatly undermined the performance of PIMCO’s Total Return Fund. As Treasuries prices rallied, the fund lost 0.97 percent in the past four weeks, while the benchmark Barclay’s U.S. Aggregated Bond Index rose 0.23 percent in the same period, according to Lipper data.

So far this year, the fund has returned 3.29 percent, less than the 4.55 percent recorded by the Barclay’s benchmark index.

“When you’re underperforming the index, you go home at night and cry in your beer,” the Financial Times, in its online edition, quoted Gross as saying. “It’s not fun, but who said this business should be fun. We’re too well paid to hang our heads and say boo hoo.”

Gross, who oversees $1.2 trillion at PIMCO, said it was “pretty obvious” he wishes he had more Treasuries in his portfolio right now.

Like I’ve said many times before, I think Treasury yields will stay low for much longer than people expect. Global flight to safety, over indebtedness, credit deflation or rather outright deflation, recessions, depressions … all these are bullish for cash and near-cash assets (of the world’s reserve currency), such as Treasury Bonds/Notes/Bills, and of course the mother of all cash … gold.

PIMCOs announcement above may be a nice contrarian indicator to get out of Treasurys for a little while … but then why would you want to daytrade such an investment … relax :)

On Friday I wrote:

It is certainly possible that global flight to safety will counterbalance an institutional selloff in Treasurys. However, it is also possible that this recent move will mark an end to the 30 year long bullish trend. Just intuitively, I see a 60/40 likelihood for both scenarios, respectively.

So far my intuition has proven correct. What does the stubborn reaction in Treasurys, coupled with soaring gold tell us? It is, in my opinion, crystal clear: That the global economy is in deep deep deep shit, that cash is king, that flight to safety is the mantra of the hour, and that the deflation trade is once again alive and well.

Word came in that Standard & Poor’s just downgraded US Debt:

A source familiar with the discussions said that the Obama administration feels the S&P’s analysis contained “deep and fundamental flaws.”

The fact that the recent debt deal didn’t accomplish anything other than smoke and mirrors is so obvious that I don’t think S&P’s pointing it out will catch anyone by surprise. However, whether or not the agency would actually take the step to downgrade is certainly an interesting event. There surely is a reason they picked after hours on Friday for this announcement.

It’ll be interesting to see how the Treasury market reacts. So far it’s always been a big yawn and actually no curtailment in Treasury buying whenever any of the big rating agencies warned about the outlook for US debt.

It is pretty apparent that a lot has to go wrong before the US government dares to default on interest payments for its national debt. So fundamentally I still see strength in this investment vehicle.

However, now due to this new rating certain institutional investors will actually have to drop US debt and shift to other assets.

How much this effect will counterbalance the global flight to safety into the Dollar and thus into Treasury bills remains to be seen.

Up to this point I have been consistently bullish on Treasury Notes and Bonds and they have done well over the past 3 years for sure.

It is certainly possible that global flight to safety will counterbalance an institutional selloff in Treasurys. However, it is also possible that this recent move will mark an end to the 30 year long bullish trend. Just intuitively, I see a 60/40 likelihood for both scenarios, respectively.

In the latter case, expect gold to soar even more.

It’s important to cut out the noise you hear in the media from people who are incapable of looking at events past the duration of a week or so.

The dollar has been taking a break from its long term rally against the Euro, but continues to stay within the trading range that I have been eying for a while.

It’s even possible that the Dollar falls further against the Euro to somewhere around 1.45, and then again rises to levels below 1.20.

Well, what should I say about gold. It continues to rise to record levels, hitting $1344 on Friday, while those who don’t understand the concepts of money and in particular gold during deflation angrily observe the trend with clueless stares.

Treasury yields have hit a 20 month low and are now at 2.38 percent.

The alarm bells are ringing for equities … once more.

Many things are being said about today’s market plunge by over 1000 points at some point. I won’t delve into that, just how today’s action beautifully shows the general idea behind my long term view.

I have been writing for a while now about my expectation of mid to long term strength in the Dollar:

Here is the Dollar over the past months through today:

This Dollar rally is best explicable as a symptom of global de-leveraging alongside deflation in the US. As investments the world over are being unwound, a flight into the world’s reserve currency is inevitable.

Today’s gains in the Dollar index were around 1% overall. In particular the Euro took a significant beating over the ongoing monetary insanities perpetrated by the ECB. A Dollar rally is at the same time usually a very bearish sign for stocks. Today’s moves beautifully accentuated this correlation, in particular during the intraday spikes and corrections. The fact that the Dollar has been moving up together with stocks over the past months is to me just a sign of how severe a correction stocks are going to be in for sooner or later.

Global delevaraging is also bullish for gold. As I have said many times: During deflation cash is king. And gold is the king of all cash. This is counter-intuitive to many people because they throw gold in one bucket with all other soft commodities. But gold is a categorically different commodity. It serves virtually no industrial production, except for some negligible applications. It is a money commodity. Silver has some money characters, but also has quite a lot of industrial uses.

Thus I explained in August of last year when commenting on an article by James Kostohryz at Minianville:

I agree with his bullishness on the dollar. I don’t necessarily agree with his conclusions on gold. I think gold may actually do OK during a dollar rally. Maybe it will drop a little, maybe rise a little, but it will most definitely outstrip other commodities. In fact, I think a smarter play when betting on a dollar rally would be to short any other commodity BUT gold.

And how has gold done throughout the dollar rally? Here it is:

You see? The Dollar has risen to a new 12 months high over the past 6 months, during that time gold dropped for a little while, but has gained back all those losses and is now actually up on the net as flight to safety continues. Meanwhile most other commodities are actually down on the net over that time. That’s what I meant when I said what I said above in my comment.

Today in particular gold was up around 2% while all other commodities got clobbered.

As a corollary of Dollar strength one can expect the prices of Treasury notes, pretty safe claims to Dollars at interest, and bonds to rise and thus their rates to fall. I have been arguing for a while that over time treasury rates will fall, but with quite some noise inbetween, sparked by false inflation fears:

I think Treasurys will continue to act well. There maybe some upward pushes here and there so long as inflation expectations pop up once in a while, but the mid-term trend remains unchanged: It is likely that yields are headed for new lows.

Treasury rates have been moving pretty much up and down and are actually still a bit up from when the rally started, but one thing I just wanted to point out is the strong move today in long term treasury instruments, alongside a strengthening Dollar and strong gold, see Mish: 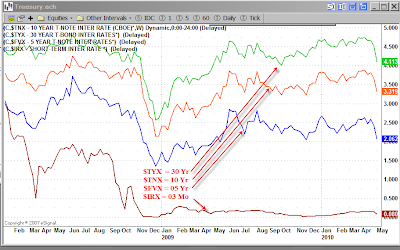 That chart shows a bullish flattening of the yield curve as I expected. Those expecting a bearish flattening (yields rising) got their clocks cleaned today as treasury bears were slaughtered.

… we shall see. I certainly expect this global sovereign debt contagion to spread rapidly and exert its effects, among other things. I would be rather surprised if US equities could somehow decouple from this avalanche. Personally I still think that a healthy mix of gold, Dollars, and Treasurys is the right recipe to protect one’s wealth in these turbulent times.

One should not think that I am suggesting that the US is immune against sovereign debt problems. The public debt in this country is crushing as well, I just think that before the US defaults outright on its Treasury bonds many much more serious things would need to happen. One thing you can be sure of: The US government will continue to raise taxes should there ever be doubts about its ability in servicing the public debt, and it will probably do so quite a few more times before the people would be ready and willing to do more than hang a few teabags on their ears, grab signs, and protest before Congress to express their inconsequential anger.