I have been trying to put together a complete picture of the credit situation in the US, in a historical chart on a weekly or monthly basis. The closest I have come is to take the St. Louis Fed’s figures for “Bank Credit at Commercial Banks” and “Total Loans & Leases at Commercial Banks“. Together they currently add up to around $16 trillion.

For a complete measure of total US debt it is still insufficient. The market for all bonds (public and private) comprises approximately $34 trillion (about $11 trillion of that is public federal debt). This, added to the previous $16 trillion, makes a total of $50 trillion.

Then there are unfunded social security and medicare obligations of about $43 trillion according to the Treasury’s own Financial Report for 2008:

The SOSI provides additional perspective on the Government’s long term estimated exposures and costs. However, it should be noted that the Government’s financial statements do not reflect future costs implied by any current policy, such as national defense, the global war on terrorism, and disaster relief and recovery. Table 3 shows the Government’s estimated present value of future social insurance expenditures, net of dedicated future revenues for the programs reported in the Statement of Social Insurance (SOSI), projected to be $43 trillion as of January 1, 2008 for the ‘Open Group’6. While these expenditures are currently not considered Government liabilities, they do have the potential to become liabilities in the future, based on the continuation of the social insurance programs’ provisions contained in current law.

A liability, or debt, is simply “the obligation of one person or group to provide future goods to another person or group.” Thus, for the discerning economist, it is rather irrelevant if the government “considers” or “officially calls” them liabilities. As far as their impact on human action is concerned, and thus all that economics cares about, they are debts. This brings the total US debt up to around $93 trillion (with total public debt at around $54 trillion).

It is reasonable to also include stocks in the overall credit picture. In fact, if we want to be consistent, and really measure the total amount of credit, meaning claims to future money at the expense of present money, we have to include them. This may appear unconventional as far as our common understanding of credit is concerned, but it doesn’t change the praxeological nature of stocks and thus their fluctuation’s effects on human action.

According to this post, total stock market capitalization is around 35 trillion, with about 30% of that being US equities: This implies that total stock market capitalization is currently at around $10 trillion in the US, which pushes total credit in the US up to around $103 trillion.

Stocks have, on the net, remained about flat since October 08. But all other credit classes have dropped. I haven’t found detailed monthly figures for the total bonds and the unfunded liabilities. Thus we have to stick with the figures on bank credit and loans/leases from the St. Louis Fed in order to infer from that the overall credit trend: 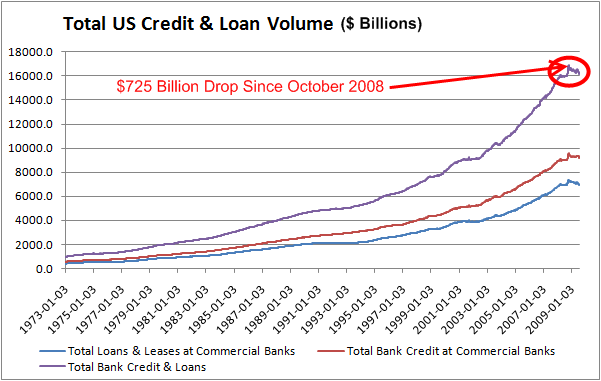 Since the peak in October 2008, total credit and loans/leases outstanding have fallen by $725 billion, a 4.3% drop. And this doesn’t even take into account the decline in outstanding bond prices and unfunded liabilities. It is, indeed, tough to ascertain whether there is a decline in the net present value of unfunded liabilities. Thus we shall ignore them for now. However, bond prices have definitely declined across the board.

On top of that, I don’t think that people are oblivious to the fact that there is absolutely no way that all social security and medicare benefits will ever be paid. Thus it would only be reasonable to conservatively assume that the present value of those liabilities has dropped by the same amount. This would almost double the total contraction to around $4 trillion.

It is rather questionable whether all this credit is marked to market. I would say that all this number gives us at the moment is at the low end of the range. Meanwhile, the true money supply since then has grown by merely $170 billion.

Why is this so important? Because it shows us the magnitude of the deflation that we are in right now, a deflation with all its consequences on home prices, consumer prices, interest rates, and stock prices. And it gives us a solid foundation to understand why various investors and maintream journalists who continue to expect, fear, or hope for inflation anytime soon are way off base and will be proven wrong in the long run.

1 thought on “Total US Credit and Loans – How Much Contraction Since Peak?”