Mish writes Ewave Count on the US Dollar Suggests Move Up is Coming: 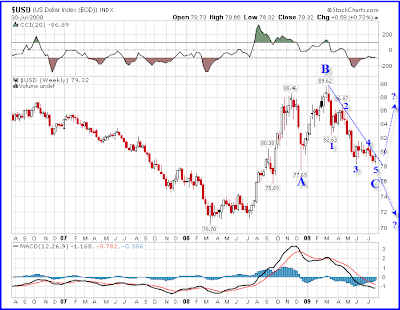 I have been following the above chart for some time and a few weeks ago emailed a friend “There is room for one more wave down”. And so here we are.

But hold your horses. Wave 5’s can truncate or extend. That is why I have two “?” on the chart. Either way, the count appears corrective and there should be another relatively strong wave (of some sort) back up once wave 5 down has finished.

Right now, should the weekly candle continue up and solidly break the trendline, it would be suggestive that wave 5 is over.

This is very significant given the fact that the US$ is typically inversely correlated with the S&P 500 as well as commodities. So rather than focusing on the S&P 500 “jello” counts directly, one is likely better off following the US$.

Bear in mind, the primary focus of technical analysis in general is not predictive capability, but rather to find spots where one can initiate a trade with a stop loss relatively close by. In that regard, the solid trendline above is the place to watch.

I am not the only one to come up with that US dollar count. Dan at Daneric’s Elliott Waves sent me the same, but far more detailed, count a few days ago (click on above link to see).

Since then I have been following his site and I can easily say he knows far more about Ewave than I do. What I really like are his “no nonsense” comments such as:

PS – I don’t really pay attention to what EWI has as a $ count. This chart I just made up tonight completely on my own. It seemed easy enough to count and the chart generally took less than 30 minutes to complete.

PSS – There is a great positive divergence on the RSI. So indeed it may turn back up hard soon enough. Its hard to say exactly how the micro waves will trace over the next month. But make no mistake, I think this chart portends the dollar will make great advances upward contrary to what most people assume.The trouble most people get into with Ewave is coming up with a thesis, then struggling to find a count that will fit it. Given Ewave is rather subjective, that is an easy trap to fall into.

That is the way it should be. I do not want to spend 4 hours plotting alternatives when all they do is say where we have been, not where we are going, only to be subjected to a barrage of 200 emails all telling me why my count is wrong.

By the way, it only took me 5 minutes to do my chart but then again I only labeled a portion of the chart, a practice I do not recommend because it can cause problems.

Please note Daneric’s comment “But make no mistake, I think this chart portends the dollar will make great advances upward contrary to what most people assume.”

That is quite consistent with my long-term belief the US dollar is in a wide trading range and is not about to collapse (because it already has and every county is embarking on beggar-thy-neighbor competitive currency debasement policies).

The key is neither one of us is forcing a count to appease that belief.